Did Capital One Reject an Atheist Symbol? March 28, 2012 Hemant Mehta

Did Capital One Reject an Atheist Symbol?

Capital One offers a program where you can customize your own credit card — perhaps with a logo or symbol — and then members of a group can get it. So a company could put their logo on a card, employees could use that card for purchases, and a cut of each bill would go back to the company.

There’s a story making the rounds from Consumerist about how someone recently tried to get the A symbol on a card but Capital One rejected it:

His initial upload was rejected by Capital One, which sent him a long list of possible reasons. And when he called to appeal, things just more bizarre.

The first person Mike spoke with said they had no idea why it was rejected and submitted his appeal.

Then the image was rejected a second time.

“I spoke to someone after the second rejection that someone there said that there was a note in my file regarding the fact that they do not allow religious or anti-religious images,” Mike tells Consumerist.

That wouldn’t be an issue, except that Jewish and Christian symbols are examples offered on Capital One’s own website.

No word yet on what the discrepancy is, but I just want to point out something Consumerist missed: American Atheists takes part in the same program. They used their logo and it seemed to get by the filters just fine: 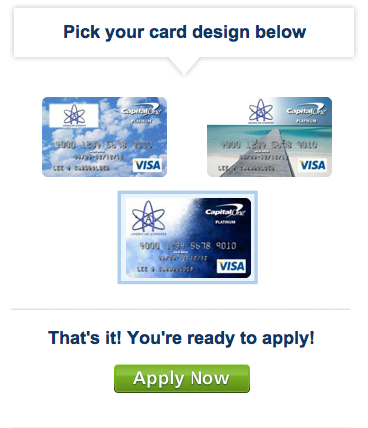 So how did they get through with their logo but the A failed to make the cut? Did I miss something?