We Should’ve Invited Miley Cyrus to the Reason Rally…

Remember when singer Miley Cyrus tweeted a quotation from Lawrence Krauss (“… forget Jesus. The stars died so that you could be here today”) and faced the wrath of many of her Christian fans? 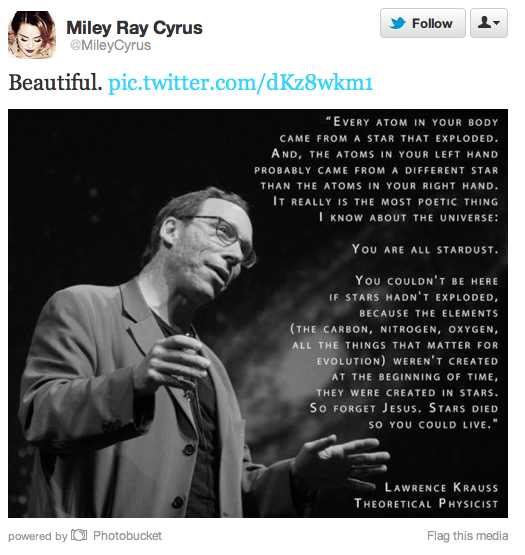 Today, she retweeted a Kelly Osbourne quotation about religion…:

Osbourne wrongly attributes that line to Charlie Chaplin — it’s actually Jon Stewart who said that — but that’s besides the point.

Yes, people retweet things because a friend says it or the line is just funny. But that’s not a pro-religion quotation by any means. It’s another indication that Miley may not be as “Christian” as one would imagine. And having another pro-science/reality celebrity wouldn’t be such a bad thing…

(For the record, I *swear* I’m not stalking her Twitter feed just waiting for her to say something anti-religious or pro-science. But I find it fascinating how much people in the media care about this sort of thing — you know someone is going to bring it up — so might as well mention it here.)

I wonder how Billy Ray Cyrus will react…

(Thanks to @patrickptomey for the link!)

March 23, 2012
FFRF Will Air a Church/State Separation TV Ad on CBS This Weekend
Next Post