Take a look at the subject of the OC Weekly‘s cover story: Bruce Gleason of the Backyard Skeptics!

Bruce Gleason, a 57-year-old Villa Park resident, has become something of a legend in the community of godless Orange Countians who read his quotes in news reports, devour his writing on his website and watch his public-access, cable-TV show on atheism. But while his method may be satire, his message is as serious as sin, he says: defending the skeptic community in Orange County…

When asked why Backyard Skeptics doesn’t pour more resources into attacking Islam, Gleason chuckles. “We’re not stupid,” he says. “We’re not going to put up pictures of Mohammad. . . . The Muslims to the Christians are like the Russian secret police to the FBI. You don’t fuck with the Russian police; they’ll cut off your fuckin’ balls. Literally, that does happen. Christians or the FBI are not going to do that. They might waterboard you.”

It’s a positive article, though Ray Comfort makes a cameo near the end… overall, pretty good publicity for Gleason and his group.

In case you need a reminder, here’s a sampling of the billboards put up by Backyard Atheists: 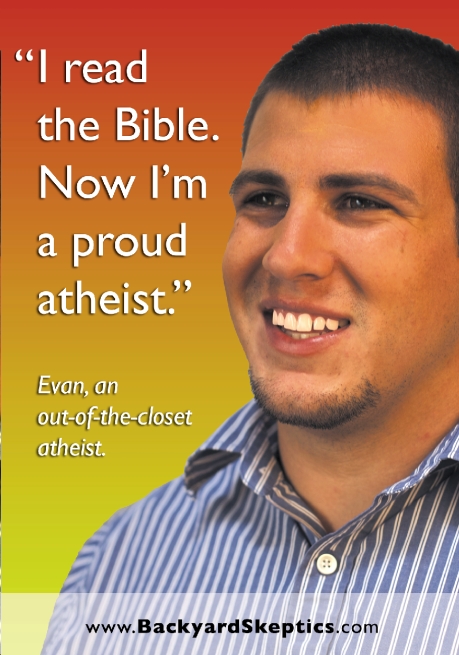 One featuring a smiling atheist (August, 2011):

This one encourages rejection of all superstition (September, 2011):

This one went directly after faith (September, 2011):

Finally, this one came out right around Valentines Day (February, 2012):

March 16, 2012 A Better Apology for the Slavery Billboard
Browse Our Archives
What Are Your Thoughts?leave a comment