In anticipation of next month’s 2012 Global Atheist Convention in Melbourne, the Atheist Foundation of Australia has purchased bus ads that raise a great point: “If God exists, I hope he has a good excuse.” 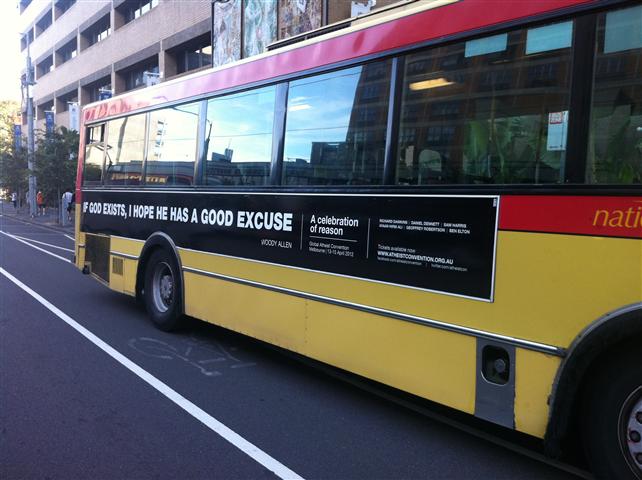 David Nicholls, president of the Atheist Foundation of Australia, had this to say about the adverts: “Woody Allen’s words encapsulate the thoughts of the freethinking community and the sneaking suspicions of a growing number of religious people as well. Considering the immensity of the unnecessary death, pain and suffering on the planet, an alleged all-powerful and all-loving god certainly has a lot to answer for.”

Incidentally, APN Outdoor (the company placing these ads) must have had a change of heart. It was only a few years ago when they rejected other ad submissions from the AFA (e.g. “Atheism: Celebrate reason”) for being “too political.”

Tickets are still available for the Global Atheist Convention, though with the impressive roster of speakers as it is, I’ll bet those won’t last very long…

March 14, 2012
I Did a Couple of Podcast Interviews
Next Post