Why Was the Westboro Baptist Church *Invited* to the Reason Rally? March 13, 2012 Kelley Freeman

Why Was the Westboro Baptist Church *Invited* to the Reason Rally?

Everyone is expecting to see Richard Dawkins, PZ Myers, and James Randi (as well as the delightful people of True Reason) next weekend at the Reason Rally, but it appears that another group will be there, too: the Westboro Baptist Church. The “God Hates Fags” people will be in attendance.

When I heard WBC would be attending, I was excited for the opportunity to counter-protest them. However, that excitement was short-lived when I learned that the Westboro Baptist Church had actually been invited by Jim Klawon, Deputy Vice President of Administration of the National Atheist Party. He sent a very tongue-in-cheek letter to Pastor Fred Phelps. 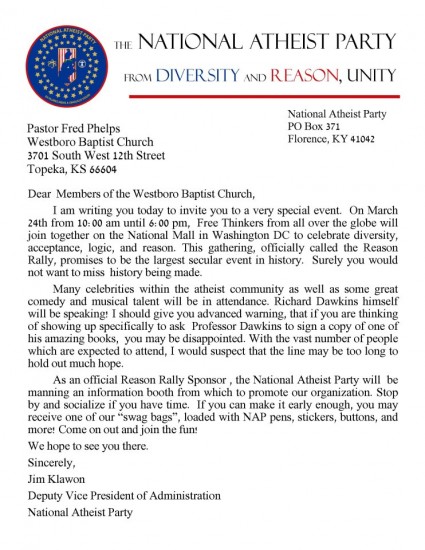 Many celebrities within the atheist community as well as some great comedy and musical talent will be in attendance. Richard Dawkins himself will be speaking! I should give you advanced warning, that if you are thinking of showing up specifically to ask Professor Dawkins to sign a copy of one of his amazing books, you may be disappointed. With the vast number of people which are expected to attend, I would suspect that the line may be too long to hold out much hope.

As an official Reason Rally sponsor, the National Atheist Party will be making an information booth from which to promote our organization. Stop by and socialize if you have time. If you can make it early enough, you may receive one of our “swag bags”, loaded with NAP pens, stickers, buttons, and more! Come on out and join the fun!”

Of course, Megan Phelps-Roper responded to the letter, on Twitter,

Dear @ReasonRally: How gracious of you! We accept your invitation & will picket your parade of fools 3/24.ッ Love, WBC

“The fool hath said in his heart, There is no God” Ps14:1 Here’s lookin’ at you, @ReasonRally! Your [unwarranted] pride is your destruction.

While I enjoy counter protesting the insanity of Westboro as much as the next person — hell, my own group has done it on the statehouse grounds in South Carolina — was this really necessary? Did Klawon really think that they needed a personal invite? It seems like he wanted to poke a rattlesnake with a stick. Is he going to be surprised when it bites him?

It’s not that I have a problem with the WBC coming in general. I feel like it will be a good show of what atheists as a whole are against — fundamentalism, bigotry, indoctrination of children, etc. But I feel like inviting them is also disingenuous in a sense. The Reason Rally is supposed to be fun, certainly, but it also is supposed to show Congress (and the nation) that atheists are not a minority to be brushed aside. Counter protesting has its place, but that doesn’t mean it can’t get out of hand. I feel like the invite could lead to an absolute PR nightmare — this is supposed to be our moment in the spotlight, not theirs.

If the WBC came on their own, maybe I wouldn’t have such a problem with this. But this the National Atheist Party asking to be picketed rather than just accepting that it could happen.

If we want to obtain acceptance as a minority and a voice in America, we’re not helping our cause by inviting people to protest our existence.

***Update***: You can read the National Atheist Party’s response to this post here.

March 13, 2012 Fort Bragg Official: We Support Rock Beyond Belief
Browse Our Archives
What Are Your Thoughts?leave a comment