Churches Can Escape Taxes but Not Foreclosures March 12, 2012 Hemant Mehta

Churches Can Escape Taxes but Not Foreclosures

One of the problems with churches is that they get away with paying no taxes despite taking in buttloads of cash every week. With megachurches, it’s especially egregious.

Before the economy tanked, many congregations bought new buildings to hosue them. They took out loans on the churches, confident they could pay the banks back. Now, with less money coming in each week, some of those churches are defaulting on their mortgage and banks dont want to refinance; they want the money or the property. 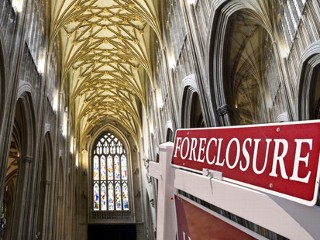 Since 2010, 270 churches have been sold after defaulting on their loans, with 90 percent of those sales coming after a lender-triggered foreclosure, according to the real estate information company CoStar Group.

In 2011, 138 churches were sold by banks, an annual record, with no sign that these religious foreclosures are abating, according to CoStar…

“Churches are among the final institutions to get foreclosed upon because banks have not wanted to look like they are being heavy handed with the churches,” said Scott Rolfs, managing director of Religious and Education finance at the investment bank Ziegler.

“And some pastors have not notified their congregants,” [Axel] Adams said. “They are fearful that if they do, they will lose congregants prematurely.”

That last line is especially sickening. It’s more important to these pastors to milk their congregations for all they’re worth instead of being up front and honest with them.

How bad is your business model when you can’t make your mortgage payments despite not having to pay taxes and getting a virtually guaranteed 10% of your congregation’s income each week?

Here’s an idea. Don’t expand if you can’t pay for it. If your income projections had to change because of the economy, don’t complain when you get treated the same way everyone else does.

You can try praying if that makes you feel better, but God’s not going to bail you out.

(Thanks to James for the link!)

March 12, 2012
Reason Rally Billboard Goes Up in Virginia
Next Post

March 12, 2012 Author of Cranston High School West Prayer Banner Lashes Out Against Jessica Ahlquist
Browse Our Archives
What Are Your Thoughts?leave a comment