We here at Friendly Atheist felt so inspired by Daniel’s story that we decided to post about it.

Originally, Daniel’s goal was to double his Catholic High School’s fundraising goal — they are raising money to build a fence for an orphanage in Africa.

His original goal, $1,200, was reached and surpassed quickly. In fact, over the course of 14 days (through March 7th), Responsible Charity, received $11,184.12 worth of donations from 516 people worldwide thanks to Daniel’s support.

Daniel is beyond pleased with the response:

Thanks to each one of you, a school will be built in Kolkata — a secular school where kids can learn without the baggage of religion. We have literally changed the lives of many kids forever. I am so happy right now! I can’t wait to get the official letter from Responsible Charity stating what we have raised so I can show it to my parents and my school. I’ll be sure to keep you up to date on how it goes. YOU GUYS ROCK! Thank you so much!

I have had the pleasure of short email exchanges with Daniel. And it turns out he recently came out as an atheist to his parents:

[My parents] called me downstairs and asked about some of the posts I’ve had on facebook about reading Hitchens or Bible quotes. I just told them then that I was an Atheist. My mom seemed ok with it and told me just to not be to cocky around other people but my dad wasn’t very happy. He seemed ok once I told him about the page. I’m extremely happy with the results that I’ve gotten and actually I just found out that after 2 weeks my school has gotten $63.25.

Yes, you read that correctly.

In two weeks, Daniel, the Catholic School Atheist, raised over $11,000 to help build a school for kids in the slums of India… while his Catholic School raised just over $63.

And on top of that, he has the courage to come out as an atheist to his parents. Brave kiddo.

Truly, the outpouring of support for this new, small charity is remarkable.

Meanwhile Responsible Charity had this to say: 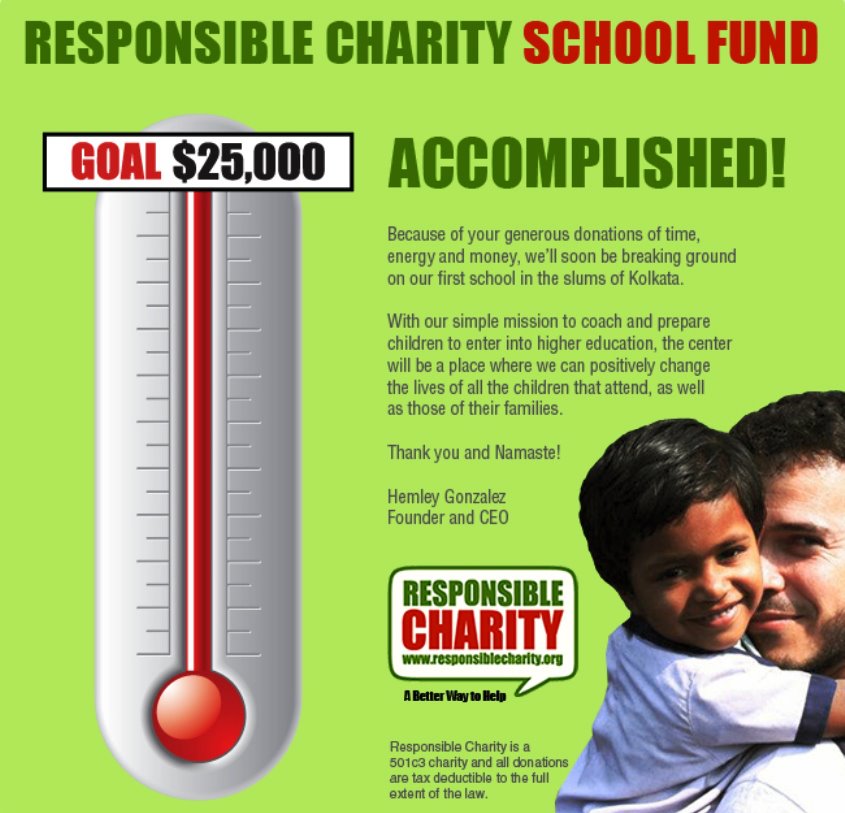 GOAL ACCOMPLISHED! — 25K Raised, it took us a while, then a great big push from a brave 14 year old young man over a week ago and we got there! (more about him here: www.facebook.com/catholicschoolatheist) — There were many fundraisers, small and large donations from supporters since day ONE, as well as folks from around the world who learned about our efforts over the last year. The time has come to now build our first secular school for children living in slums. More to come, stay tuned!

Hemley Gonzalez, founder of Responsible Charity, described the school goal on his personal facebook page nearly a year ago:

We need to open a school to eliminate many of the challenges we currently face in the slums. As of today (April 11, 2011) we’ve been able to place 11 children in two schools in the area but it has not been without difficulties and many rejections. We now need to take control of the situation and give more children a place where they are welcome regardless of their caste and can prepare them to enter higher education schools…

The cost of establishing a new school and maintaining it for the first year will run in the neighborhood of $23,000-$25,000USD, this includes deposits, monthly rent, commissions and small to medium repairs if necessary as well as the cost of salaries for teachers, caretakers, uniforms, books, medicines, kitchen, nutritional program and other supplies will have to be calculated in the future as we start to take kids off the streets and into a place that will positively change their lives forever.

Daniel and Hemley have been exceptional examples of not just atheism but of good human beings who want to help the world because it’s the right thing to do.

March 10, 2012
A German Shoemaker Wants to Help Atheists with Their Soles
Next Post