Harold Camping: I Was Wrong About That Whole ‘World’s Gonna End’ Thing

Harold “The World’s Gonna End on May 21st” Camping: 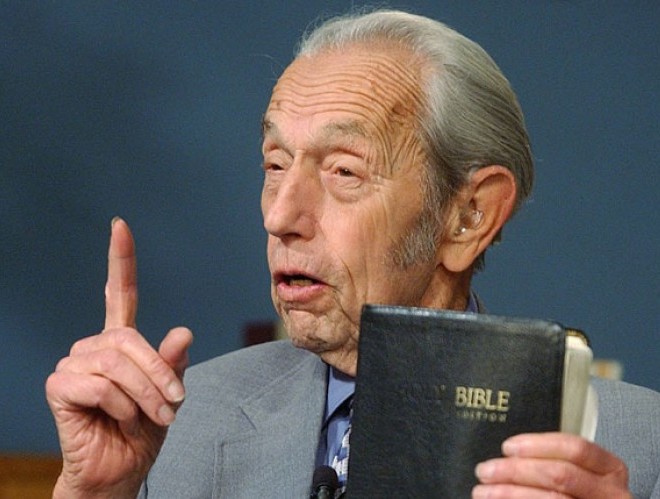 The May 21 campaign was an astounding event if you think about its impact upon this world. There is no question that millions, if not billions of people heard for the first time the Bible’s warning that Jesus Christ will return. Huge portions of this world that had never read or seen a Bible heard the message the Christ Jesus is coming to rapture His people and destroy this natural world.

Yes, we humbly acknowledge we were wrong about the timing; yet though we were wrong God is still using the May 21 warning in a very mighty way. In the months following May 21 the Bible has, in some ways, come out from under the shadows and is now being discussed by all kinds of people who never before paid any attention to the Bible. We learn about this, for example, by the recent National Geographic articles concerning the King James Bible and the apostles. Reading about and even discussing about the Bible can never be a bad thing, even if the Bible’s authenticity is questioned or ridiculed. The world’s attention has been called to the Bible.

“Ridiculed” is right. Camping made a mockery of a faith that needs no help getting people to laugh at it. It’s pathetic to watch him try to spin it into something positive:

But we got people to talk about the Bible!

Yeah, and so do the God Hates Fags people. They, like Camping, make people rethink the association they have with Christianity. So for that, at least, atheists owe Camping a debt of gratitude.

He added that Family Radio is no longer speculating about future apocalypses. Because that would just be crazy.

March 8, 2012
The Creationists Are Looking for Targets
Next Post