American Atheists’ Hebrew Billboard Must Relocate Due to Landlord’s Opposition

American Atheists’ Arabic and Hebrew billboards were supposed to go up yesterday in Brooklyn, but one of them has already hit a snag: 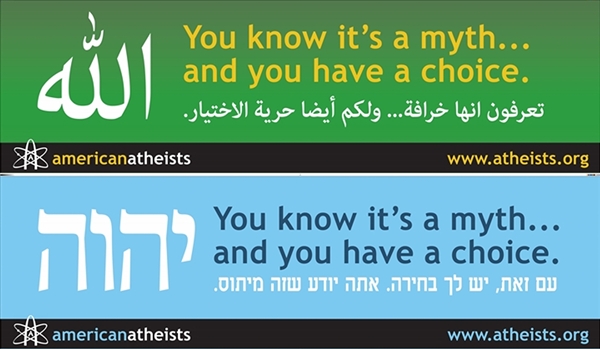 Apparently, calling out the Jews who just go through the motions at Synagogue and telling them they have a choice about the matter is too offensive for some people. When Clear Channel workers came to a Brooklyn apartment to install the billboard, the landlord refused to let them in:

… at the last minute, landlord Kenny Stier refused to allow workers from the advertising company Clear Channel into his building…

“The Jews have stopped the billboard,” said Silverman. “It’s really ugly bigotry. As a former Jew, it’s repugnant to see Jews act like this.”

What did Stier say in response?

Nothing. He’s taking the coward’s way out:

“I don’t want to get involved in this,” he said.

He doesn’t want to get involved… other than making sure the perfectly legal and inoffensive billboard doesn’t get anywhere near his building.

Silverman is amazed that Stier in particular would act this way:

The billboard’s going to go up somewhere by the end of the week, according to Silverman, but I’m shocked that Stier is allowed to decide which billboards go up just like that when he doesn’t own the billboard space.

On the upside, more publicity and a chance for more people to hear AA’s message…