The Secular Alliance of Indiana University found a clever way to raise money earlier this semester.

They set up shop in a well-traveled part of campus, put out cups with the names of different faith organizations on them, and asked passers-by to donate to the cup of their choosing. The atheists said they would attend a service for whichever “faith cup” earned the most. Meanwhile, half the proceeds would go to Doctors Without Borders (while the other half supported the SAIU group).

Educational and charitable. Beat that! 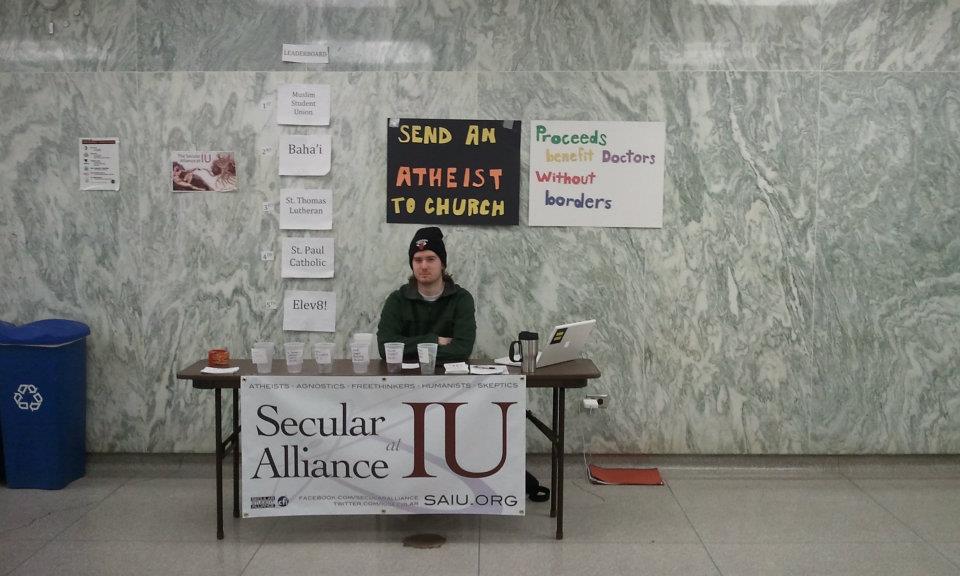 First place was the Muslim Student Union, followed by the Bahá’i group, and the atheists promised to go to both services. So far, it’s been a worthwhile experience for them:

“They seem to be a really nice bunch of people, and they’re socially conscious,” [Carly Jane] Casper said. “As nonreligious people, you need to be exposed to religious ideas. You can’t ignore them. It’s important for us to have close relationships with religious groups.”

Even if you don’t support the idea of attending any house of worship, this is the sort of outreach that shows what college atheist groups are all about. They’re open to new ideas, they’re willing to hear what you have to say, and they’re not going to reject anything outright just because it conflicts with their pre-conceived notions.

Now, let’s see some Christians and Muslims attend the next Secular Alliance meeting.