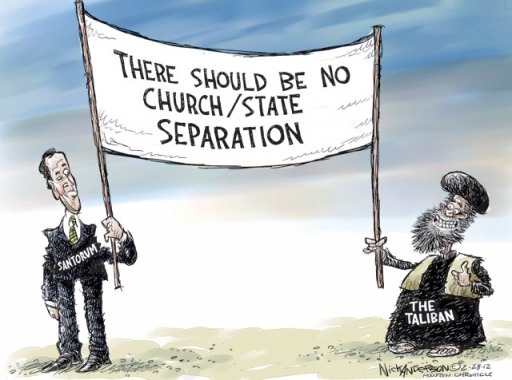 Rick Santorum doesn’t believe in church/state separation and that should frighten everybody, religious and non-religious.

Here’s the relevant excerpt from his interview on ABC’s This Week With George Stephanopoulos, regarding the speech President John F. Kennedy made in which he spoke out in favor of church/state separation:

STEPHANOPOULOS: That speech has been read, as you know, by millions of Americans. Its themes were echoed in part by Mitt Romney in the last campaign. Why did it make you throw up?

STEPHANOPOULOS: You think you wanted to throw up?

How out of touch with reality can one man be? To suggest that people of faith are left out of the national conversation and people without faith are the only ones who get to speak out is the exact opposite of what’s actually happening.

We live in a country where only one Congressperson, Rep. Pete Stark (D-CA), is openly non-theistic.

We live in a country where religious groups have incredible political power — power they built up, ironically, by claiming that they didn’t have any political power.

We live in a country where every single president in modern times has been a Christian. Not only have they all been Christian, atheists are the least electable minority group in the country. Forget getting elected — we still have to deal with the fear of coming out publicly to our family and friends.

We may talk about Mitt Romney‘s “Mormon problem,” but he’s still one of the frontrunners in the Republican primary. Even in the Democratic Party, you won’t see an openly non-religious candidate leading the pack anytime soon.

Patrick Caldwell at The American Prospect echoes these thoughts:

… Americans lacking allegiance to an organized religion are vastly underrepresented among public officials. Far from being ostracized as Santorum might imagine, politicians exploit religion to boost their fortunes at the polls. It’s been a common sight to find Santorum or Newt Gingrich gladhanding voters at a church on Sundays during campaign season, and the party’s opposition to same-sex marriage rights is couched entirely in the language of Christianity.

And Rick Santorum thinks we’re dominating the national conversation? He says this while he’s the sitting atop the current Republican polls? He has no idea what’s actually happening in this country to people who don’t buy into his worldview.

Then again, what do I know. I went to college, so I’ve clearly been indoctrinated by lefties.

February 27, 2012
Interfaith Coalition Asks Candidates to Keep Religion Out of Politics
Next Post

February 28, 2012 New Zealand Billboard Claims That Jesus Cures Cancer
Browse Our Archives
What Are Your Thoughts?leave a comment