Military Official Puts God in Presentation and Gets Called Out On It February 26, 2012 Hemant Mehta

This is what happens when atheists in the military become more aware of their rights and aren’t afraid to speak up.

Air Force Lt. Gen. Ronnie Hawkins, also the head of the Defense Information Systems Agency (DISA), recently gave a talk to all employees in the DISA department and he included the following slides in his presentation: 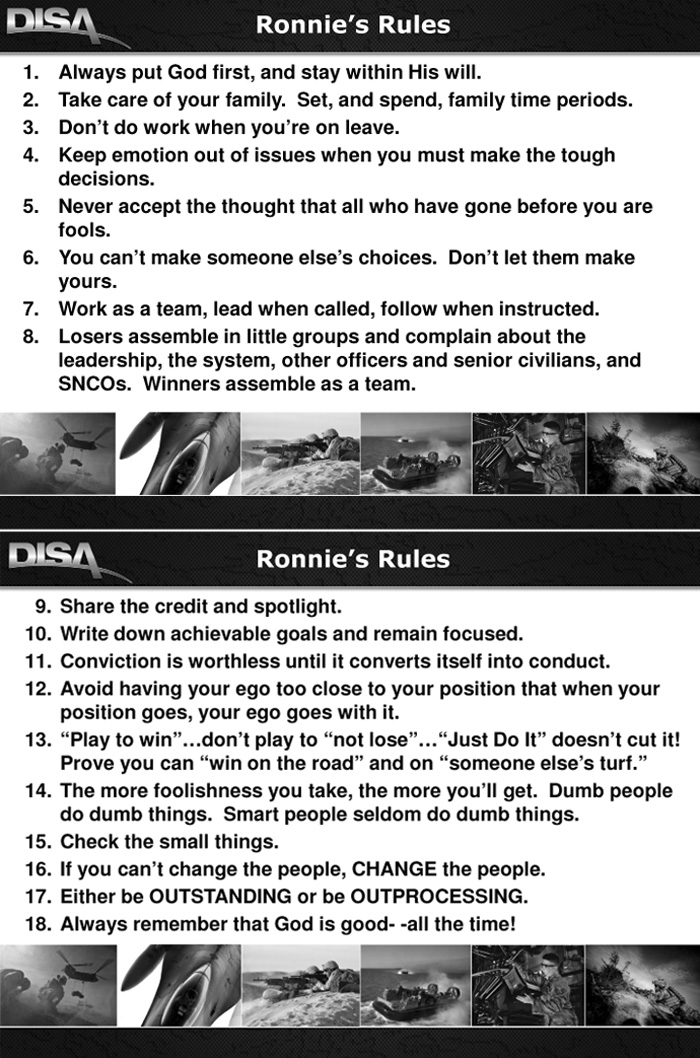 Why #1 and #18 are on the list, I don’t know. Even if they’re personal “rules” he uses, they don’t belong in a presentation he’s giving as military leader.

Thankfully, someone was alert and aware that this was improper behavior:

A DISA employee who witnessed the presentation spoke with Air Force Times under condition of anonymity. He said he was shocked that a senior leader would include such direct references to God in a commander’s call that in his opinion was held to say “I’m your new commander and this is what I expect of you.”

The employee said that he provided the presentation to the Military Religious Freedom Foundation, a nonprofit advocacy group, “in hopes of saving lives.”

MRFF’s founder and president, Mikey Weinstein, is calling for Hawkins to be court-martialed for violating his oath to the Constitution. He said he is representing 21 employees at DISA.

The employee said what might seem like an ordinary presentation to Air Force employees can be easily obtained and used as propaganda in other countries — something he said a commander should know. People in Arab nations for example, might see Hawkins’ comments as a show of support toward one religion by the U.S. government, he said.

There’s no word on any punishment for Hawkins yet, but this is what we need to keep doing in any public line of work. No commanding officer or government official or public school administrator should be using their positions as a pulpit for preaching their religious beliefs. It doesn’t matter what the intent is or how innocuous it may be — until they get called out on it, they won’t learn their lesson.

(Thanks to Justin, a Foxhole Atheist, for the link)