Coming Out As An Atheist Isn’t Easy February 26, 2012 Hemant Mehta

Coming Out As An Atheist Isn’t Easy 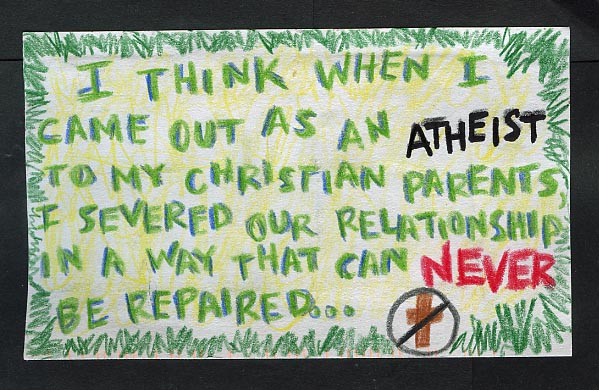 It’s easier said than done — and I know I say this as someone who still has a relationship with his parents despite disappointing them with my atheism — but if your family can’t handle your newfound logical beliefs, you may be better off without them.

You would hope, in time, they could at least accept your beliefs, but religion has a way of warping peoples’ minds so that they can’t just deal with issues like this in a rational way. It’s not just life or death to them; it’s about afterlife and eternity. So I’m not holding my breath for them to come around.

The fact that this person came out at all, though (probably knowing this would be the reaction), strikes me as remarkably brave.

February 26, 2012
Student Whose Article About Atheist Discrimination was Banned from School Newspaper Gets $1,000 Award from FFRF
Next Post