Italy and Israel: Fewer Special Favors for the Religious

This week has produced two exciting pieces of news, although (sadly) neither one pertains to the United States.

First, Italy is strongly considering charging the Vatican property taxes on all non-church properties. The Vatican owns quite a bit of commercial property in Italy, including hostels, hospitals, etc., but doesn’t pay property taxes on any of it. Churches would still be exempt, but this proposal could raise millions — or even billions — of Euros a year if implemented. 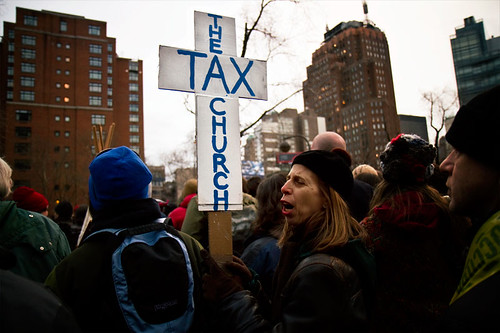 Tax benefits for religious organizations are a pet peeve of mine, so I’m thrilled to see social pressure creating an impact in another country.  The way I understand it, Italians are getting fed up with foregoing such a huge source of income, especially because money is so tight in this economy.  Which begs the question: why aren’t Americans more upset about this in our country?  Many people think religious organizations do good (and they sometimes do, of course), and therefore should be subsidized, but I also imagine that many people simply haven’t thought about it.

Under Section 501(c)(3) of the Internal Revenue Code, religious organizations and other non-profts are exempt from paying federal income taxes.  And at the state level, they’re exempt from paying property taxes.  Part of the deal, though, at least at the federal level, is that these organizations cannot engage in “political activity.”  If they do, they lose their tax exempt status.  And that means that no congregation leaders ever endorse candidates for public office, or if they do, then they lose their tax benefits immediately.

What?  You don’t think that’s the way it actually works?  Then check out Project Fair Play for some additional info.  And maybe social pressure can make some changes here in the U.S., too.

Second, the Israeli Supreme Court has invalidated a military exemption for ultra-Orthodox Jews.  Again, there seems to have been social pressure from the rest of the population: simply stated, it seemed unfair that one group would get a special exemption while the majority of citizens did not.

The First Amendment provides religion a special place in this country, and that’s OK.  But the more people speak up about this kind of favoritism, then (perhaps) the more questions will be asked about how special that place needs to be.

February 24, 2012
A Lot of Your Ancestors Had Slaves, Too
Next Post