I Don’t Think They Understand the Meaning of ‘Atheist’ February 24, 2012 Hemant Mehta

I Don’t Think They Understand the Meaning of ‘Atheist’

Earlier this week, the Daily Mail reported (as did other news outlets) that Richard Dawkins‘ ancestors owned slaves. As if that somehow discredited him or his beliefs.

Now, the same paper as well as other news outlets are continuing the campaign to discredit Dawkins by trying to make a big deal out of something Dawkins readily admits: 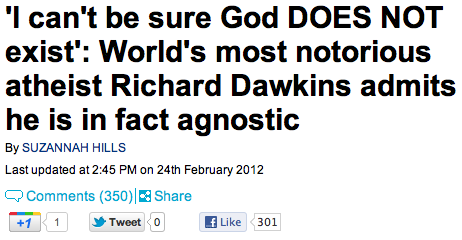 This is not news. And it’s not even accurate.

Dawkins said back when The God Delusion was published in 2006 that he wasn’t absolutely certain that god didn’t exist. On a scale of 1 (“I know God exists”) to 7 (“I know god doesn’t exist”), he put himself at a “6, but leaning towards 7.” He then added in the very next sentence:

He’s still an atheist. He doesn’t believe in the existence of any god.

Dawkins also pointed out that he didn’t think there were many people in category 7, but he put it in his book to simply balance out category 1 (and we *know* plenty of religious people fall into that one).

But in the tabloid-y British press, they’re acting like this is brand new information:

Professor Richard Dawkins today dismissed his hard-earned reputation as a militant atheist — admitting that he is actually agnostic as he can’t prove God doesn’t exist.

The country’s foremost champion of the Darwinist evolution, who wrote The God Delusion, stunned audience members when he made the confession during a lively debate on the origins of the universe with the Archbishop of Canterbury.

It’s not a confession; it’s something he’s been very open about for decades. If it stunned the audience, it’s only because they are so gullible as to believe every word other people say about Dawkins instead of listening to Dawkins speak for himself.

The article says far more about the ignorance of the audience and the reporters than it reveals anything special about Dawkins.

February 24, 2012
Seeing the Invisible: Feminism and Atheism Intersect
Next Post