An Atheist in Catholic School Wants to Show That He Can Be Charitable, Too February 24, 2012 Shannon Burgdorf

An Atheist in Catholic School Wants to Show That He Can Be Charitable, Too 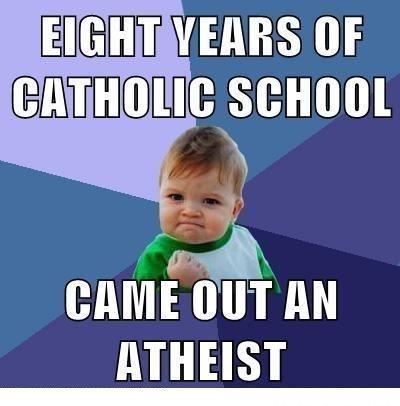 Here’s the story of a boy named Daniel.

He was born into a Catholic family.

He is forced to attend Catholic School.

He has come to the conclusion that he is an atheist.

Hello everyone, My name is Daniel and I’m an Atheist who is forced to attend a private Catholic school. I regularly experience harrassment due to my lack of belief in a deity.

A few months ago I decided to read the entire Bible (King James version) cover to cover and just didn’t buy into any of it. My parents and teachers don’t know I’m an atheist…

Recently, Daniel’s school began a fundraiser. In my chat with Daniel, he said the principal rants about how “atheists never give to charity; only Christians do.”

I decided I’d try to beat my school in a fundraiser for a secular charity instead of for the church. So I talked to one of my friends and she managed to get this whole thing organized. I realized it would be more productive to just simply try to help others instead of getting mad at people at my school. Plus, this way I don’t get suspended for “attacking” somebody else’s beliefs.

They are a secular charity that helps children and women in India and are trying to build a school in Calcutta. Secular Charity was started to do what the corrupt Missionaries of Charity have failed to do: help kids in the slums of India to find a better life. On a shoestring budget they are doing amazing things.

What I find the most intriguing are the photo albums on the Responsible Charity’s Facebook page labeled Transparency with this note:

In an effort to continue to be as transparent as possible we will post as many receipts of all the purchases we make with your donations. Items such as food and supplies in local markets, taxis, street corner clothes and such are impossible to get receipts for, it is India after all LOL! But we’re trying our best and want to honor and respect YOU, our donors and supporters with a view of all we are doing with your help. THANK YOU!

Daniel is asking for donations and this is how you can help:

I’m asking you to please go to www.responsiblecharity.org and donate something. Even if it’s just a dollar I will be proud. Please add a note to the donation saying “Daniel’s fundraiser” so that it counts toward my campaign to out-charity my whole school! I know I may face a back lash for this from those around me but it’s important to me to help other kids get an education without having to deal with religion!

Thank you for reading it and if you can’t donate anything please spread the word!

***Update***: If you are unable to find “Note to Seller” go to the Responsible Charity’s Facebook page and let them know! Many people have done this already 🙂

Give now and spread the word!

Isn’t this the way almsgiving should be done? Add it to the LIST!

***Update***: Since a lot of you are having trouble finding the “Note to Seller” on the PayPal page, reader Jesse provided this helpful screenshot: 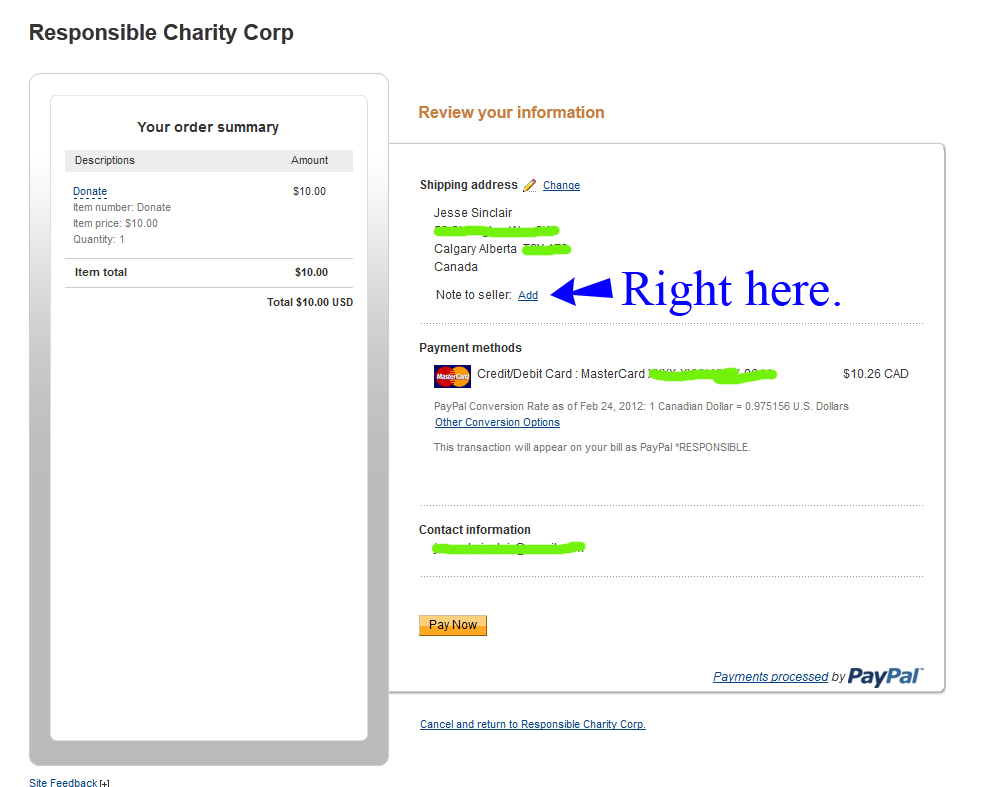 Since Daniel’s fundraiser began (The Catholic School Atheist) in less than 48 hours,Responsible Charity has received $4,925.27 (and still going) from 497 folks from all over the world including many of our own supporters who had contributed extra funds in addition to their ongoing support of our work.

Special thanks are also in order to our friends Tracey McPherson, Religion Poisons Everything, The friendly atheist, The Thinking Atheist, and all others who have shared Daniel’s story and continue to do so.

We are incredibly happy to help this young man send a clear and strong message to his religious school about the true and compassionate nature of freethinkers around the world. The funds will be used towards the building of a secular school and our ground work with children and their families living in the slums in Kolkata, India. From all of us here: THANK YOU!