Muslim Attacks Atheist for Wearing Muhammad Costume… and Judge Lets Him Get Away With It February 23, 2012 Hemant Mehta

Back in October, two members of the “Parading Atheists of Central PA” marched in a Halloween parade dressed as Zombie Pope and Zombie Muhammad. 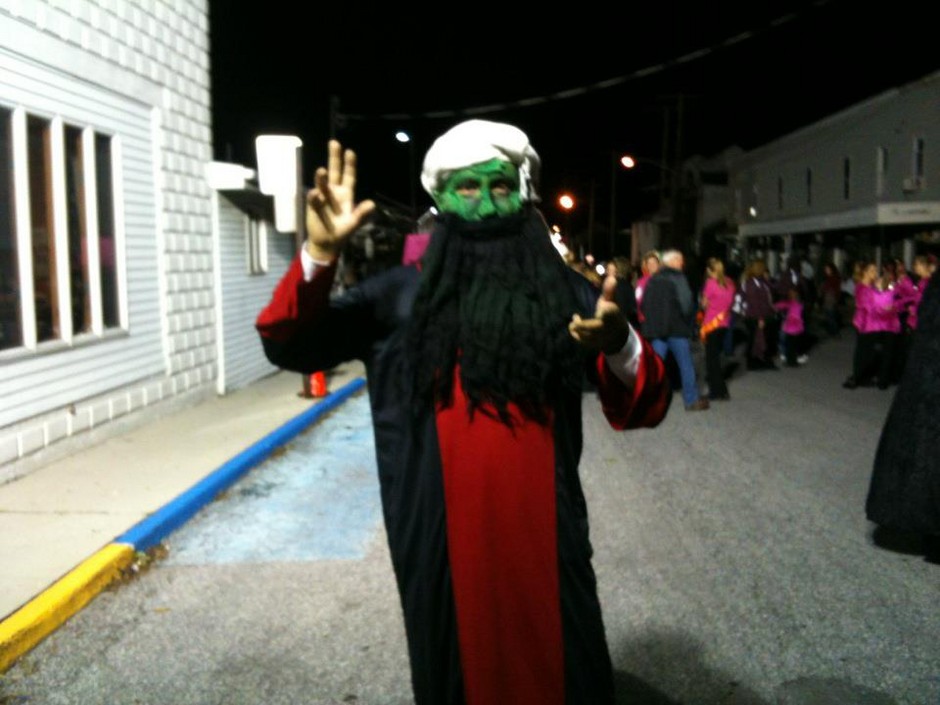 You can decide for yourself whether that was hilarious or dickish. (I voted for the latter.)

But regardless of your answer to that question, we should all be appalled by what happened to Ernest Perce, the atheist in the Muhammad costume. A Muslim man in the crowd — Talaag Elbayomy — ran out and began choking him while trying to rip off his beard and take away his sign.

I bring all of this up again because the case went on to involve the police…:

The Muslim man and Perce both called police to report a crime. Both kept walking, and a few blocks down found Sgt. Brian Curtis. He talked to both and came to this conclusion.

“Mr. Perce has the right to do what he did that evening, and the defendant in this case was wrong in confronting him,” he said.

… Elbayomy was charged with harassment, but District Judge Mark Martin threw it out after criticizing Perce, the victim, and even calling him a “doofus.” The audio is also on YouTube.

Martin, who has done several tours of duty in the Middle East, said Perce would be put to death in those societies for his crime, but Perce wonders why that’s relevant in this country.

“He let a man who is Muslim, because of his preference of his culture and his way of life, walk free from an attack,” Perce said.

In other words, the Muslim attacker got away with what he did — he can walk away with no penalty whatsoever — while Perce got called names by the judge.

You can hear everything for yourself on the video below (and Justin Vacula has some excerpts on his site):

How Judge Martin’s ruling is considered an appropriate response to what happened, I don’t know. (Apparently, Perce’s video wasn’t allowed as evidence during the proceedings.) The verdict the judge issued included these words:

If [Elbayomy’s] intent was to harass, annoy or alarm, I think there would have been a little bit more of an altercation, something far more substantial as far as testimony going on that there was a conflict. Because there was not, it is not proven to me beyond a reasonable doubt that this defendant is guilty of harassment. Therefore, I am going to dismiss the charge.

So… because Elbayomy didn’t physically hurt Perce more, he is allowed to get away with it? Would the judge have issued the same ruling if it had happened the other way around?

Sure, Perce was trying to be offensive, but that gives nobody the right to go after him like that. Knowing Perce, though, he may “fight back” by creating an army of Zombie Muhammads for next year’s parade…

There’s a good summary of the story here:

February 22, 2012
Trailer for the James Randi Documentary
Next Post

February 23, 2012 Lawsuit or Not, the Rowan County Board of Commissioners Are Going to Pray to Jesus at Meetings
Browse Our Archives
What Are Your Thoughts?leave a comment