As I’m sure we all know, Lent is in full swing and we have successfully survived Ash Wednesday.

As a former Catholic, who always wiped off my ashes as soon as church was over, I have to say that Lent seems to be a bit of a publicity stunt. Wear ashes on your head all day on Ash Wednesday. Tell everyone within earshot how close to Jesus you are by gloating about what you are sacrificing for Lent. Proclaim you just can’t eat meat on Friday — though the flesh of sea creatures is totally acceptable.

According the the Catholic Church, Lent is a season of preparation for the celebration of Jesus’ Resurrection at Easter (disregard that this particular holiday season is of pagan origin). The Church officially promotes three ways for preparing for Easter:  fasting, almsgiving, and prayer.

What I’ve heard and witnessed, however, is the PR routine wherein those who practice go around touting what they are “giving up” for Lent.

Truly, Lent is the same as making New Year’s Resolutions with only one major difference:

Lent: Giving up something for Jesus

New Year’s Resolution: Giving up something for yourself

Lent also has a time limit. Whereas a New Year’s Resolution could become a lifelong habit and better you as a person in mind, body, and/or health… Lent gives you 40 days and then says, “Now you can go back to partaking in that vice because Jesus is risen.”

Let’s look at each of the components of an official Lent. I’ll take them in order of how interesting/baffling/thematically-relevant-to-this piece they are:

Prayer. Hmmm. I thought this was already a requirement. Whatevs… it still does nothing anyway. When I was going through catechism in sixth grade I asked the nun two questions:

1. “If God always know what we are thinking, why do I have to pray?”

Her answers — not surprisingly, even at that tender age — amounted to, “because the Church says so.” 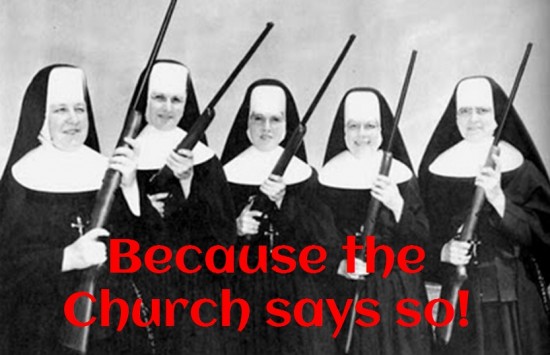 In any case, it’s hard to hear the constant, earnest prayers of all the Decent Folk out there when they are so busy letting their friends know that, for the next couple of weeks, they won’t be able to hit TGIFriday’s Happy Hour Special because their wife made them give up drinking outside of the house for Lent.

Almsgiving. In my time in Catholic school and my experiences with those who practice Lent, never have I heard them talk about almsgiving (save for the priest, where it was just a word in the sermon and even then it was used as a call to give to the Church — which, we all know, is not poor). Giving to the poor/charity is great, but again, any news of proposed charitable works is lost under telling everyone how awesome and hard it’s going to be to not eat chocolate for 40 days.

Fasting. The meat (so to speak) of this man-made tradition. The main thing that people do at Lent is to “sacrifice” a bad habit… because actual fasting is a bit extreme, no?

There are tons of very creative ways people try to make refraining from vices/bad habits look like sacrifice. It seems so odd to liken “giving up junk food for 40 days” to the “systematic public brutal torture and execution” of that the man they believe is their god went through. If I were Jesus, I’d be offended. Heck, if I were Jim Caveziel, I’d be offended! Like when men compare passing a kidney stone to childbirth — Oh No You Didn’t!!

My proposal this Lenten season: Instead of publicly declaring one’s devotion to a specific faith by making empty gestures loudly, let’s start a list of good deeds that we can do in anticipation of the coming Spring. Who’s with me?

By doing good things that actually matter, we can make our world a better place. And isn’t that what Lent is all about? … No? Well, it should be.

Leave your recommendations for good humanist deeds in the comments section, and if you need help thinking of things to do, there are lots of sites to check out. Our family likes to go to dosomething.org.