Helen Ukpabio, Witch Hunter, May Be Coming to Texas

You may have heard of Helen Ukpabio, the evangelical Christian from Nigeria who holds some despicable beliefs:

… Ms. Ukpabio’s critics say her teachings have contributed to the torture or abandonment of thousands of Nigerian children — including infants and toddlers — suspected of being witches and warlocks.

Seriously, a horrible excuse for a human being. And she’s supposedly set to tour the United States to spread her Gospel of I-Made-This-All-Up: 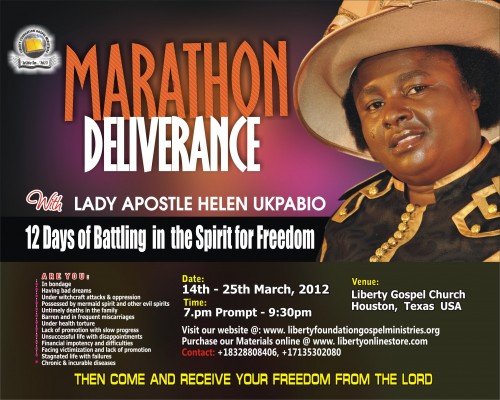 Even though the poster says the events are taking place in March — and I had someone lined up to go to the event and write up a report for this site — it looks like the tour has been postponed… maybe because word is spreading this Ukpabio is crazy, even for evangelicals.

In the meantime, a new website has been created to attack atheists who are trying to shine the light on Ukpabio. It may be a Poe, but who knows. It’s called — and it’s not a typo — “The Atheists Ploy to Destroy Christianity.”

My new goal in life: Get featured on that website.

February 22, 2012 Trailer for the James Randi Documentary
Browse Our Archives
What Are Your Thoughts?leave a comment