After seeing religious groups of all kinds form at the University of Pennsylvania, a few freshmen have started a group for atheists called “Rekindle Reason: Atheists, Agnostics, and Freethinkers.” 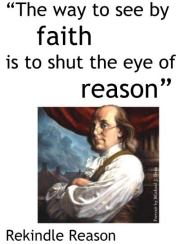 Navin Sasikumar, a grad student there, is pleased with their mission statement, which includes this excerpt:

Association with individuals of similar philosophies is oft lost for the irreligious, and we aim to make certain these members of the Penn community have such access and are aware that they are not alone in their views. Our meetings shall be havens in which people can question religious beliefs in absolute safety and security.

We wish to encourage the constituents of the University of Pennsylvania community-at-large to think critically about their superstitious and indoctrinated beliefs, as well as make the community aware of the detrimental effects on individuals and on society that religious belief all-too-commonly spurs.

February 22, 2012 Stop the Religious Persecution!
Browse Our Archives
What Are Your Thoughts?leave a comment