Atheist Group at Colgate University off to a Great Start February 21, 2012 Hemant Mehta

Atheist Group at Colgate University off to a Great Start

I’m always amazed when first-year college atheist groups manage to put together a popular event but Matthew Knowles and Thomas Wobby just began the Secular Association of Skeptical Students at Colgate University (in New York) and their Darwin Day celebration last week was a hit, getting them front-page coverage in their campus newspaper:

Wobby and Knowles appealed to University Chaplain and Cath­olic Campus Minister Mark Shin­er about a group on campus, lead­ing to the formation of the new secular group, Secular Association of Skeptical Students (SASS). The group is not yet approved by the Student Government Association, but has been strongly supported by the interfaith community as well as the Newman Community, the Catholic student group.

“We want to have an outlet for people of non-religious views to add to the interfaith discussion and to help alleviate the stigma against atheists that exists in society today,” Wobby said.

Wobby, an atheist, expressed that there are many stereotypes surrounding athe­ists and agnostics that they would like to dispel. When asked about discrimi­nation at Colgate toward secularists, the founders felt that Colgate has been very accepting, especially compared to other settings.

“However, many of our posters announcing our first meeting did get ripped off the walls,” Wobby said, im­plying that some modicum of dissent may be present. The posters advertised SASS’s first group meeting in late De­cember with the quote from Thomas Edison: “All bibles are man-made.”

If you’d like to see that poster that got ripped down, it’s right here.

The group even made a cake for Darwin Day. Looks delicious 🙂 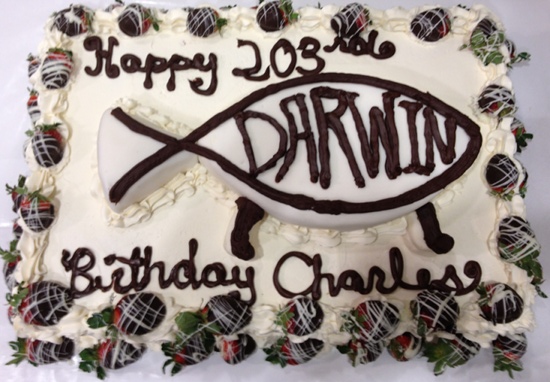 If you go to that campus, check out their group. Hopefully, this is just the first of many events they’ll put on this year.

February 21, 2012 I Guess Conservative Christians are Geminis
Browse Our Archives
What Are Your Thoughts?leave a comment