We Made Ken Ham Angry

***Update***: Commenters are quick to point out that Ken Ham has no problem asking people to vote for the Creation Museum in the poll — that’s ethical and perfectly fine to him. 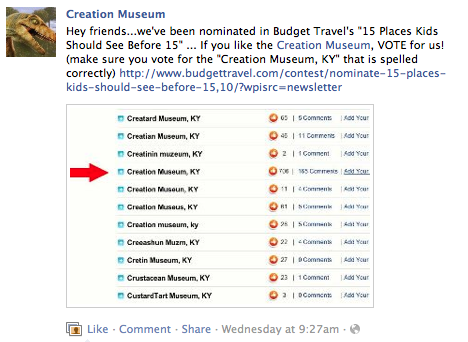 But when atheists tell people to vote against it, we’re “unethical” and “intolerant.”

Ken Ham is *furious* with atheists:

For atheists, there really is no basis for their ethics, therefore they believe they can do whatever they want if they can get away with it. What is “right” or “wrong” to such people is all relative. So, to them, their tactics aren’t “unethical,” and their actions… are just what atheists are inclined to do because they are so intolerant of Christians.

Damn! We must be pretty damn evil. What did we do to invoke Ham’s wrath?!

Answer: We crashed a poll about places kids should go see before they turn 15 and pushed his Creation Museum off the top of the list. 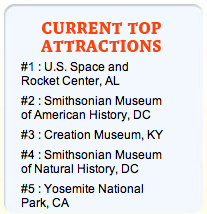 Atheists, Y U NO ETHICAL?!

Look, crashing the poll is just for shits and giggles.

Depriving children of knowing the evidence-based, scientifically-sound reasons for how we came to be because you insist on pushing the mythology mentioned in your outdated, inaccurate holy book? That’s unethical.

February 16, 2012
Jessica Ahlquist is Victorious; Cranston School Committee Will Not Appeal Ruling to Take Down Prayer Banner
Next Post

February 17, 2012 Anonymous Woman Suing City Over Prayers Reveals Her Identity
Browse Our Archives
What Are Your Thoughts?leave a comment