This past weekend I attended ReasonFest, a regional convention held on the University of Kansas, with over 500 attendees.  When I arrived at the KCI airport Friday afternoon, I immediately regretted forgetting my jacket in Houston, as the temp was in the twenties and dropping rapidly.  After an afternoon of restful fireside reading, there was a casual pre-convention party at my host’s home that kicked off the weekend right with great conversation and local brews. 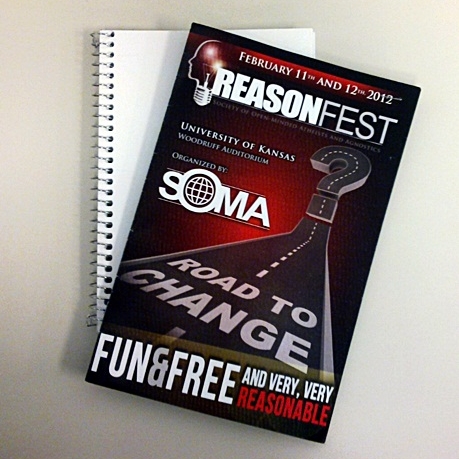 It’s fascinating to watch a convention coalesce in the early morning.  Sponsor and vendor booths are set up, pamphlets and products placed on display, and then people begin to trickle in.  Gradually the volume rises, and the echoes from large vendor rooms decline.  This year’s sponsors were the ever-active Secular Student Alliance, the Freedom From Religion Foundation, the Center For Inquiry, American Atheists, and the Richard Dawkins Foundation for Reason and Science. 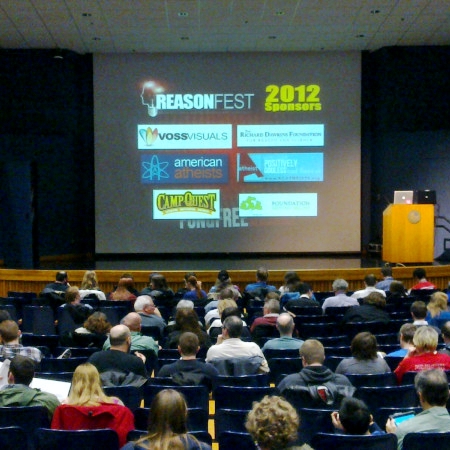 From the outset, the theme of this well organized convention became clear: community.  Building, growing, and strengthening our community is a vital part of our unique body of non-theists.  Mark Blumberg and Judy Johnson, the first two speakers, sought to break down our ways of thinking through analysis about adaptation and overcoming all forms of dogma.

“Dogma is an ugly scar on the face of reason.” – Judy Johnson

The first panel and keynote speaker focused on interfaith, humanism, and identifying goals that we could all focus on. While several concerns were raised about interfaith work on the panel, everyone involved agreed that we should focus on advancing human well-being.

The keynote speaker, humanist chaplain and author Greg Epstein, asked us all to focus on what we do believe in rather than what we don’t believe in.  While I agree with this as a positive goal, ultimately your beliefs govern your actions and most beliefs in supernatural deities involve domination and control. We need to use caution when approaching religious organizations and individuals with interfaith projects.  Caution is especially important with groups like the one that burst in during Epstein’s talk, shouting and condemning us all to an eternal torment in “hell.”

“The greatest element of the humanist movement is you.” – Greg Epstein

The evening’s entertainment was twofold. We were first educated with a new documentary examining the Creationist-contrived controversy of teaching evolution in American classrooms, then engaged with writer Jamila Bey and comedian Keith Lowell Jensen.  When asked about his atheist comedy act, Jensen explained that the intent of his stand-up is to humanize atheists and get people talking about non-belief.  He advises atheists to first make fun of ourselves in debate. The evening concluded with “drinking reasonably” at a local bar, where we digested the messages presented on Day One of ReasonFest.

Day Two started a little late, but moved along quickly with more talk about community and coexisting in the oft religious world that we inhabit.  The atheist side of the panel “Is Religion a Force for Good in the World?” concluded that religion was merely our first attempt at explaining the world around us, and that we were ready to grow past religion using philosophy, reason, and science.

Following this panel was Darrel Ray‘s talk about Sex & God (also the title of his latest book).  This well-received presentation continued Jensen’s earlier joke about duck dicks.  Yes.  Really.  Duck penis.  After this, we invested in our Reason Fest micro-community by breaking bread together at a local cafe. 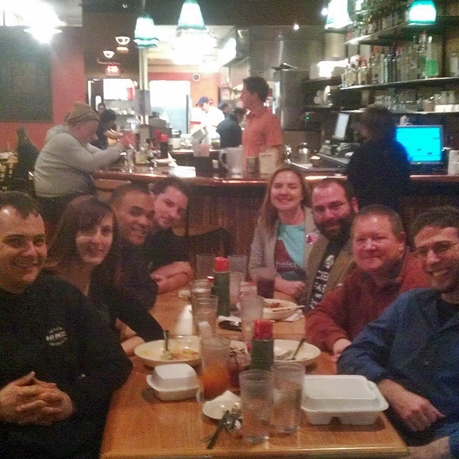 Returning from lunch, we were presented with two back-to-back debates about science and religion co-existing, with a very strong case given on the secular side of both debates.  After these debates, I was left wondering, “If science and religion cannot co-exist, what does that mean to us?”  Before presenting Sunday’s keynote speech, Jerry DeWitt of Recovering from Religion (RR) performed an impromptu southern “sermon” and call to support the (RR) fundraising raffle.  The day ended far too quickly with an extensively informative, and ultimately emotionally moving, lecture from Jennifer Michael Hecht on the history of doubt. Hecht’s latest book was sold out, so I ventured online to purchase it.  Reason Fest wrapped up with an ice cream social and plenty of hugs from new and reinforced friendships.

A personal note: The best part of this trip was the new friendships I made and firing up my desire to strengthen our non-theist community in Houston.  A great highlight was being seated in Darrel Ray’s living room, reading his latest book and asking questions about it as I turned the pages.  Also, this weekend to Kansas ended delightfully!  I awoke Monday morning to a magnificent snowfall, which made for an adventurous trip to the airport.

Bonus: Prior to ReasonFest, Michaelyn Everhart raised $1,000 to support the event.  On the fly, while Everhart was receiving her mohawk on stage, Amanda Brown was able to raise an additional $500 with the quick thinking of convention attendee Robbie Macken from the University of Missouri.

February 15, 2012
Cranston School Board: Heed These Words
Next Post

February 16, 2012 Support for Evolution Education Comes from a Surprising Source
Browse Our Archives
What Are Your Thoughts?leave a comment