How Religious is Britain? Not Very, Says Richard Dawkins

In the week following the 2011 UK Census, the Richard Dawkins Foundation for Reason and Science decided to commission their own poll (with their own questions) to find out just how religious people in Britain were.

It turns out a lot less than even they imagined:

Just 54 per cent identified themselves as Christians, compared to 72 per cent in 2001.

Almost three-quarters of those who described themselves as Christian did so because they were born into a faith, rather than because of their beliefs. Just a third (32 per cent) of these believe Jesus was physically resurrected. One in five do not believe in the resurrection, even in a spiritual sense.

Just under half, 49 per cent, do not think of Jesus as the son of God, while one in 25 of those who declare themselves Christian do not believe he existed at all. 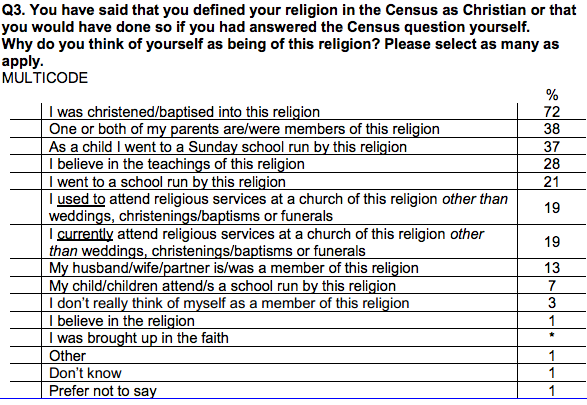 It lends support to the notion that, if that many Brits aren’t even truly religious, then politicians need to stop pushing religiously-based legislation.

You can see the press releases from the RDFRS here and here. The raw data (including questions asked) is here (PDF).

Incidentally, as Richard Dawkins was promoting this study in the media yesterday, many headlines seemed to focus on his “inability” to recall the subtitle of Charles Darwin’s book.

Rev Giles Fraser: Richard, if I said to you what is the full title of ‘The Origin Of Species’, I’m sure you could tell me that.

Richard Dawkins: Yes I could

Fraser: Go on then.

Fraser: You’re the high pope of Darwinism… If you asked people who believed in evolution that question and you came back and said 2% got it right, it would be terribly easy for me to go ‘they don’t believe it after all.’ It’s just not fair to ask people these questions. They self-identify as Christians and I think you should respect that.

You can hear the audio here.

Because, you know, if he can’t remember the subtitle of “On the Origin of Species,” God must exist. He recalled it within a couple of seconds, of course, but even if he didn’t, what would that have proven? Absolutely nothing.