Attack of the Theocrats!: A Review and an Interview with Author Sean Faircloth February 15, 2012 Emily

Attack of the Theocrats!: A Review and an Interview with Author Sean Faircloth

This past October, while attending the TX Freethought Convention, I had the opportunity to hear Sean Faircloth speak. Directly following his presentation, I ventured to the bookstore and purchased his first book, Attack of the Theocrats! How the Religious Right Harms Us All — and What We Can Do About It (which is officially released today). 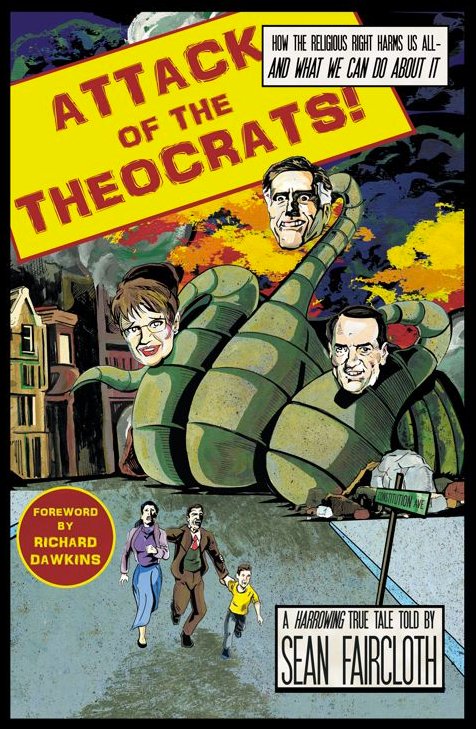 Earlier in the day I had perused the bookstore and had bypassed the gaudy bookcover a few times. The maxim rings true, as the contents of this book are superb. Attack of the Theocrats! addresses current issues, and I recommend it for atheists & moderately religious people.

The book opens with a forward from Richard Dawkins that gives a concise preview of what is to come. Don’t skip the preface; it contains a valuable image of Faircloth that helps the reader understand his passion for justice. Using his wealth of knowledge through a background of politics and law, Faircloth starts off strong with an extensive critical review of religious bias in American politics and the social arena. As he exposes a multitude of issues, they begin to fester inside of you. I would like to have seen more of the book dedicated to “What You Can Do,” than the brief section on p. 132, but this book is at least educating and creating a dialogue — especially around child related issues.

More than ten states allow federally funded, unlicensed religious child-care facilities. Depending on the state, this can mean that some of these religious child-care facilities are exempt from a broad range of health and safety laws. Others are offered fewer exemptions, but the real question is why would any exemption exist at all, particularly when the safety of children is at stake?

The focus later shifts to an intimate look at the Christian fundamentalists and Dominionists that are bent on reshaping the United States into a theocracy. Anyone strongly opposed to gay equality and those who consider zygotes sacred will have a challenging time, at first, agreeing with Faircloth due to his unapologetic stance on the issues. Through ample examples, he conclusively explains how religious influence on a variety of issues harms everyone, including religious conservatives, and rigorously attempts to jostle us all into action.

Secular Americans remain a sleeping giant, a huge demographic that has thus far failed to flex its own muscle, much less galvanize the general population. We ignore people suffering under religious privilege while shaking our fist at a slapped-together manger with a plastic baby Jesus in the town square at Christmas time. While symbols are meaningful and these particular symbols on public grounds do violate Madison’s Constitution, Secular Americans must do better to reach all Americans. We must explain the human story — the human harm and the outright abuse of our tax dollars that result from religious privileging in law.

Faircloth aims at the outset to reach across the divide and enlighten both secular and religious readers, but the overall message will only fully pass the filters of a person with secular ideals. If you’re skeptical of the harm religious bias plays in each of our lives, read this book. It is unfortunate that an entire chapter of this small book was devoted to promoting the Secular Coalition for America, as though required by the publisher, but the message does act like a buttress for the chapter that follows.

We must protect the religious liberties guaranteed in the Constitution, including the right sof the so-called Moral Majority and their allies to express their ideas with absolute freedom. However, special privileges based on their religious bias, or anyone’s religious bias, must be removed from our laws. We must devote ourselves to rebuilding Jefferson’s wall of separation between church and state, a wall that has crumbled so terribly these last thirty years .We must reinvigorate a culture o f innovation. And if we do these things, a great America will become even greater, a proud America will become even prouder.

Overall, Faircloth was able to promote a sense of urgency in a fast-paced read, while being inspirational and encouraging. Attack of the Theocrats! closes with a stimulating vision for a restored secular America, that will inspire you to action — if you’re already a secular American. I could give you all of the details, but you really need to turn through this one yourself.

An interview with the author:

How can non-theists better engage with religious communities to educate them on the benefits of State-Church separation?

I encourage secular people to create our own public advocacy organizations, but to also build alliances with local affiliates of groups like, for example, the gay community and liberal religious groups, but we should make sure to offer our own distinct voice.

What would you like to say to people feeling powerless in addressing the issues in the book?

The religious right felt powerless in the 1960s. They were, and are, a minority. They were ignored. They organized — very successfully — for their ideals of division and exclusion, sexism and homophobia. If they can do that, we can — and are morally required to — take action for justice, rationality and inclusion. Our demographic is growing. This is quite feasible — if people take action.

Why should people care what you have to convey?
American society faces creeping theocracy. It is just not a question of what might happen in the future. It is the stark reality of what has already happened, as I document in the book. We have a patriotic duty to act. The enlightment worldview is an ethical imperative. We betray that imperative if we sit on the sidelines. This book is about directly involving ourselves as secularlists in changing our world for the better.

The Secular Decade Strategic Objectives lay out a clear plan for how we can get involved in creating a secular America. Do you have any advice to parents?

I hold to the view that we want to encourage children to learn critical thinking skills and draw their own conclusions about a whole range of issues, including about religion. If young people so decide, I’d love to see youth involved in secular activism, partipating in the coalition activities I describe in my book. Young people can make very persuasive advocates on many issues, including, for example, advocating for objective textbooks and for protection of children from some forms of religious bias in law pertaining to corporal punishment, faith healing, and child care.

What spurred the writing of this book?

There have been tremendously persuasive books written for our perspective regarding whether or not to believe in god. But we have lacked a specific plan to empower us to play our proper role in society as a whole. I feel that the social action tactics in the secular movement need improvement. I wanted this book to offer a specific strategy for how to best frame our issues to appeal to a broader public.

While researching and writing this book, what did you learn about yourself (or otherwise)?

I learned how hard it is to write a book! I also learned that writing the plan and my motivations for it made me more impassioned about this cause. For my entire life — ten years in politics, lobbying, grassroots organizing, starting a children’s museum — I’ve wanted to see rationality prevail, to see the next generation live in a more rational and more compassionate world.

This book really crystallizes my own philosophy. It is not an armchair philosophy. It is a philosophy of passionate action. I’m not a great scientist like the great scientists I so admire (I’m honored to work for one). I do however think I’m good at forming concrete strategic plans and advocating for those plans with passion. This books makes me feel proud that I have something to offer in support of the Enlightment Worldview that I love.

You can purchase your copy of Attack of the Theocrats! here!

February 15, 2012
Purity Bear Tells You to Stay Abstinent Before Marriage... AGAIN!
Next Post

February 15, 2012 Atheists Make Better Lovers, Says Billboard
Browse Our Archives
What Are Your Thoughts?leave a comment