The Aftermath of a School Prayer Case and a Judge’s Awesome Statement February 13, 2012 Hemant Mehta

Last year, Christa and Danny Schultz sued the Medina Valley Independent School District in Castroville, Texas because they knew their son’s high school graduation ceremony would include a prayer. 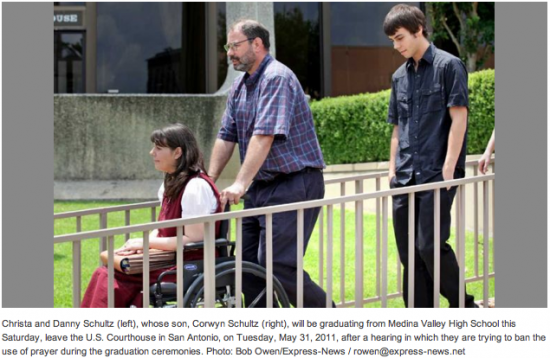 U.S. District Judge Fred Biery agreed with them, saying that the graduation prayers would “violate the establishment clause of the First Amendment.”

Unfortunately, the district appealed and the 5th U.S. Circuit Court of Appeals took their side. They said since it was a student-led prayer and not a school-sponsored prayer, it was ok. Corwyn Schultz ended up missing his own graduation ceremony.

Anyway, that was last year. Why bring it up now?

First, Newt Gingrich has specifically called out Judge Biery in several stump speeches, calling for him to be fired because of his ruling against the school district:

“If you read his ruling, it is so outrageously dictatorial and anti-religious that he [Biery] clearly does not understand America,” Gingrich said. “We don’t need judges who don’t understand America…We need to reset the judiciary, explain to them the limits of the American Constitution and prove to them that judges appointed for life cannot be dictators and they cannot threaten our children with jail for saying the word ‘prayer.'”

Second, Americans United decided to file an “amended complaint” back in October. Basically, in the months since filing the original lawsuit, they found lots of evidence that points to the school having a hand in promoting Christianity.

Our motion — which includes photographs taken from inside the school and videoclips from its graduations and football games — details how both sets of events have consistently featured Christian prayers and how the school district has tightly controlled these events’ programming and contents.

Instead of going to trial again, the two sides have settled out of court.

Judge Biery wrote the opinion (PDF) to settle the case once and for all. It’s three pages and you should all read it.

Even better is the short personal statement made by Biery at the end of the opinion:

During the course of this litigation, many have played a part:

To the United States Marshal Service and local police who have provided heightened security: Thank you.

To those Christians who have venomously and vomitously cursed the Court family and threatened bodily harm and assassination: In His name, I forgive you.

To those who have prayed for my death: Your prayers will someday be answered, as inevitably trumps probability.

To those in executive and legislative branches of government who have demagogued this case for their own political goals: You should be ashamed of yourselves.

To the lawyers who have advocated professionally and respectfully for their clients respective positions: Bless you.”

(Thanks to Tom for the link!)

February 12, 2012
Foundation Beyond Belief is Coming to Australia...
Next Post