As I write this, here are the current NHL standings: 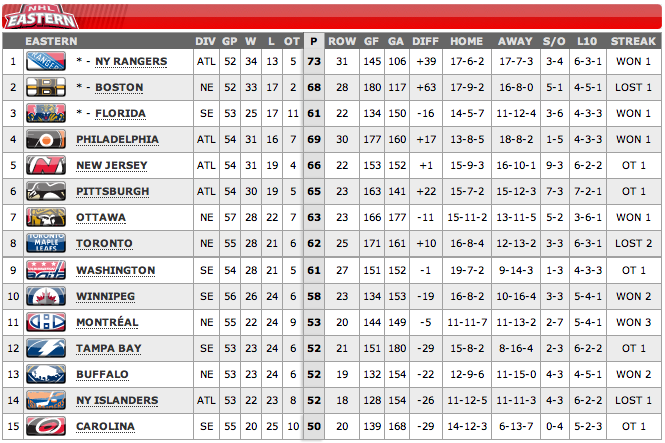 If you look near the bottom of the list, you see the Montréal Canadiens. In 11th.

Their playoff hopes don’t look great since only the top 8 teams get to go into the postseason and they’re quite a ways back in the points column, so what should their fans do?

According to the Archdiocese of Montreal, they should pray. And to help them out, the Church took out a full page ad in a local paper:

The Canadiens are purposely left off the list of 15 teams. They’re replaced by “Prions” — French for “let Us Pray” — in the coveted 8th slot.

Faced with declining church attendance rates, the archdiocese is known for employing slick, clever ads that appeal to the public at large when it solicits funds each year.

“You know, the Catholic church doesn’t have the same means as other advertisers, so they need to make an impact,” said Hugo Leger, vice-president of Bos advertising agency, which designed the ad.

Leger said when people get past the joke, they will find a simple message that encourages prayer: “We just want to remind people that the church exists,” Leger said. “And when we say pray, that could mean for the Canadiens, or an invitation to pray in general.”

Commenters below are quick to point out that the English definition of “prion” is “a protein particle that is believed to be the cause of brain diseases” — which sounds about right, too…

Good thing they’re acknowledging that it’s a joke or else someone might accidentally mistake the ad for foolishly suggesting anyone’s prayers would give the team the boost it needs. If they do make the playoffs, it’ll be because of their talent (or the collapse of a higher-ranked team), not because people clasped their hands together in desperation.

(Thanks to Dorothy for the link!)