An Oklahoma Lawmaker Makes News – In a Good Way

By Bentley Owen
February 9, 2012
My home state, Oklahoma, has a reputation for producing inept legislators. Last month, Sen. Ralph Shortey tried to ban aborted fetuses from our food (you know, just in case). Rep. Sally Kern declared in 2008 that “no society that has totally embraced homosexuality has lasted for more than, you know, a few decades” — and that’s not even the most bigoted statement of her career. And now the forces of right-wing inanity have brought the Personhood Act to the state senate, which declares that “the life of each human being begins at conception.”

All is not lost, however. Sen. Constance Johnson, a Democrat, tried to add this satirical amendment to the bill.

However, any action in which a man ejaculates or otherwise deposits semen anywhere but in a woman’s vagina shall be interpreted and construed as an action against an unborn child. 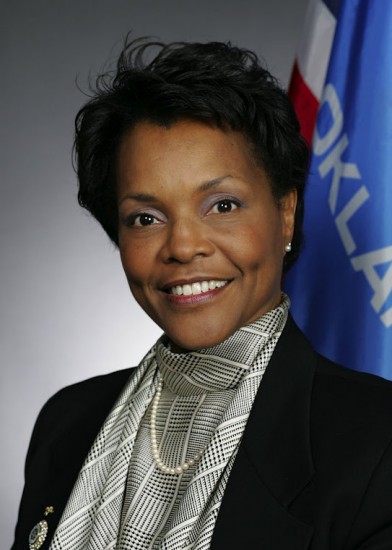 Sadly, the Tulsa World does not feel like sharing the joke. This is how they reported on Johnson’s attempted contribution:

Sen. Constance Johnson, D-Oklahoma City, said that while it takes two people to create life, Crain’s measure focuses only on half of that equation.

The “Every Sperm Is Sacred” amendment, along with an earnest one by Sen. Jim Wilson that would force fathers to be financially responsible for their partners for the duration of the pregnancy, did not make it. The rest of the bill passed the Senate Committee on Health and Human Services, which means it’s headed to the Senate floor.
If the Senate approves the legislation (which seems unlikely), Gov. Mary Fallin would knowingly invite a costly lawsuit against that state by signing it. It will not become the law of the state, and the farther it goes, the more time it will waste.
It seems that Johnson is mocking both the lack of reason, and the fact that the bill is not serious to begin with (even if the convictions of its supporters are). For this, I applaud her.
(Via Jezebel)
——————-
Update:
Johnson posted an explanation of her amendment at ‘Comment Is Free’ section of The Guardian:

My amendment seeks to draw attention to the absurdity, duplicity and lack of balance inherent in the policies of this state in regard to women. Oklahoma already incarcerates more women than any other place in the world. Under the latest provisions, a woman in Oklahoma may now face additional criminal charges and potential incarceration for biological functions that produce or, in some cases, destroy eggs or embryos, such as a miscarriage. In vitro fertilization, involving the fertilization outside the womb for implantation into the womb, would also potentially represent a violation of the proposed Personhood statute.

Finally, this amendment seeks to draw humorous attention to the hypocrisy and inconsistency of this proposal – from the Republican perspective of down-sized government and less government intrusion into people’s private affairs.

February 9, 2012
Working on an Interfaith Project? Then Leave God at the Door
Next Post