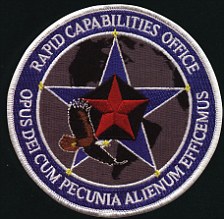 Except they’re not doing “God’s work.” I’ll be honest; I read the description of what the RCO does and it still doesn’t make much sense to me, but it’s pretty evident God is nowhere to be found in that office. So there’s no reason for the patch to say that.

The Military Association of Atheists and Freethinkers pointed that out to Air Force officials and — surprisingly — they changed the logo! 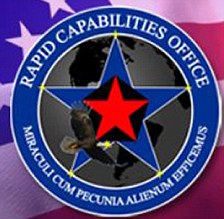 It’s not really any better. The RCO isn’t performing miracles any more than it’s doing God’s work — but if you see the word as a metaphor, I suppose it’s a small step up.

In any case, it’s probably a net positive since Republican Congressperson Randy Forbes is irate:

‘It is most egregious,’ Virginia Rep. Randy Forbes told Fox News. ‘The Air Force is taking the tone that you can’t even use the word “God”.’

‘(It is a) bridge too far in terms of the rights of men and women who serve in our services and their ability to express their faith.’

Right. Because we all know how hard Christians have it in this country when they want to express their faith…

Forbes sent a letter (PDF) to Air Force officials, co-signed by 35 other members of Congress, asking them to reverse their decision. If the officials are interested in doing the right thing, they’ll toss that letter right in the trash where it belongs.

No one is taking away any rights from religious military personnel. They’re simply removing an unnecessary reference to God in a logo that’s meant to be a symbol for everyone in the Air Force, not just the religious people.

February 9, 2012
An Oklahoma Lawmaker Makes News - In a Good Way
Next Post

February 9, 2012 nakedpastor: Jesus Predicting the Future
Browse Our Archives
What Are Your Thoughts?leave a comment