There is a new Secular Student Alliance affiliate at Emerson College in Boston, Massachusetts!

It was started by freshman Ian Stewart after a winter break spent engrossed in The God Delusion. He and two other freshmen started the group because “[they] felt inspired to counter campus faith-based groups by uniting [their] fellow non-believers.” 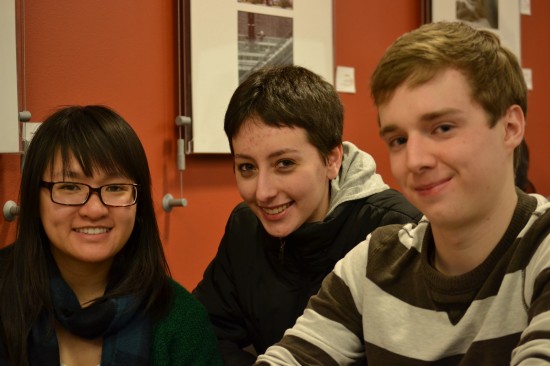 Look at those charming faces.

They’ve spent seven hours over the last week getting students to help create their group on campus:

“As someone who is both gay and an atheist, I feel more persecuted as an atheist than as a gay man, and that’s saying something,” said [Stewart] the performing arts major. “I wanted to create a group for not just atheists, but agnostics and humanists, so that they could feel comfortable.”

I have heard that a lot from non-theists I’ve met over the years. It’s not always easy to come out — and if you’re a double threat (heh), then it can be even harder. That why it’s great that the number of SSA affiliates has been rising so rapidly. It’s easier than ever to come out as an atheist now, but there’s still some areas where it can be scary. Stewart says he wants to help remove the stigma attached to being an atheist and plans on getting his group involved with volunteer work.

Kate Caldwell, the president of the Emerson Christian Society, says she was surprised to hear about the formation of the group, possibly due to Emerson’s largely secular student body.

“There are the Christian, Catholic, and Jewish organizations on campus, and I just never had thought that people with agnostic or atheist views would want a place to meet and talk about that,” said the writing, literature, and publishing major. “If they do, I think that’s totally cool.”

Sounds like an awesome, totally reasonable response! Glad to hear that there are some open minded and rational people at Emerson. Not everyone understands why the group is a welcome addition to the school’s groups, but member Sara Detrick had a response to that:

“I was talking to a girl on my floor who is a part of a Christian group here, and she said there were so many secular people there is no need for the group,” [member] Detrick said. “I think because there’s so many of us, we need to be connected so that we can get things done.”

I’m looking forward to see how this group does. I hope they flourish up there in Boston!