Rock Beyond Belief Draws Near…

In anticipation of the Rock Beyond Belief event taking place at the end of March at Fort Bragg, North Carolina, Sgt Justin Griffith is in the spotlight as the organizer. 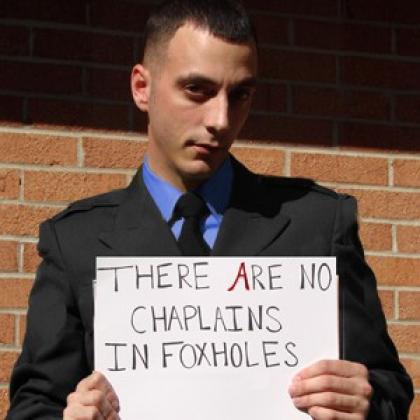 Thankfully, he’s an excellent spokesperson, too: an activist who risks his life for our country, knowing that there’s no afterlife awaiting him:

Scheduled for 31 March, Rock Beyond Belief comes two years after another controversial concert at Fort Bragg, “Rock The Fort”.

Sponsored by the Billy Graham Evangelical Association, Rock the Fort was billed as an “evangelical event” with Christian bands, family activities, and an emphasis on spreading the gospel to the entire community.

Despite attracting criticism for hosting the event, the top brass at Fort Bragg said they would be willing do the same for an event thrown by a different religious group.

“So the next day, I raised my hand and said, ‘Fort Bragg, I’ve got an event’,” says Mr Griffith.

The concert was originally scheduled for 2011, but was postponed until his group could secure the same location as Rock The Fort: an outdoor field capable of hosting thousands of people, in view of the Main Post Chapel.

Though the Rock Beyond Belief concert is the most public of Mr Griffith’ s efforts to make the military more accepting of atheists, it is not his only one.

He’s also working to ensure that servicemembers can have “atheist” listed on their official military records.

“It took me a year and a half to get my records changed to atheist. When I told them I was atheist, they put ‘no religious preference’,” he says. “I told them that’s unacceptable. I do have a preference, and that’s atheism.”

I’m honored to be one of the speakers at the event. I plan to spend my time on stage screaming, “I’m not worthy! I’m nooooot wooooooorthy!”

But if there are any other messages you’d like me to pass along to the troops, please leave them in the comments.

February 6, 2012
Anonymous Woman Sues City Over Prayers, but Judge Won't Proceed Unless She Reveals Her Identity
Next Post