Why Don’t Atheists Cut Down All the Trees? February 3, 2012 Hemant Mehta

Why Don’t Atheists Cut Down All the Trees?

In case you can’t bear to watch that, here’s a rough transcript, courtesy of Hoyden About Town:

Pat Robertson: Atheists don’t believe in ANYTHING. I mean, a theo means “no God,” they have no Gods, so they don’t have anything, so they don’t believe in anything. But they can protest, somebody who believes in SOMETHING. I mean, isn’t this a strange thing, that we would allow somebody who doesn’t believe in anything to restrict the freedom of those who do? I mean, it makes no sense! Sooner or later we’re going to wake up, but I think maybe we are…but our hats are off to the forest service, this is just one minor little skirmish, but these atheists, they’re just enormously creative in figuring out things they can do that give us trouble. Kristi…

Kristi Watts [interrupting]: You know what I just thought of, Pat?

Kristi Watts: You know you’ve got different kinds of, well, let’s call them religions…there’s one called Wicca, and they’re all about the environment, right? So, their religion that believes in the environment, and they believe that trees are their god, why are these atheists not saying that we should cut down every tree? Because it’s offensive. [holds out hand towards PR} Do you know what I mean?

Yes… Wiccans like trees… and Wiccans are a religion… so let’s CUT DOWN ALL THE TREES! 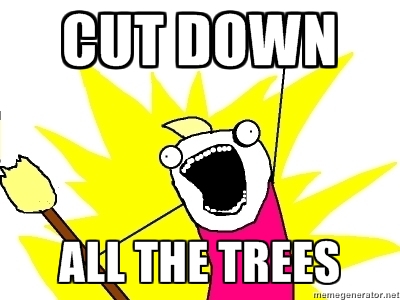 Never mind that Wiccans don’t actually “worship” trees… and they aren’t going against the Constitution and trying to codify their beliefs into the law, or denying women the right to have an abortion because of their beliefs, or preventing gay people in a loving relationship from getting married…

None of that matters to Watts, though. We’re atheists so, apparently, we must protest everything people of faith do without rhyme or reason. What’s stopping us, since we don’t believe in anything?

Atheists aren’t gunning to chop down all the trees us Pagan tree-huggers hug because they predominantly believe in environmental and climate science, and know that cutting down “every tree” would destroy our ecosystem, and life on earth itself…

Pat Robertson actually looks uncomfortable in that clip as Watts begins talking but he doesn’t do anything about it. A responsible person would’ve told her she’s speaking nonsense and set the record straight. But Robertson has a major problem with noticing nonsense even when it’s staring him in the face, so it’s not surprising that he would just let it slide.

(Thanks to Anh for the link!)

February 3, 2012 Christian Girls Who Say Sh*tuff
Browse Our Archives
What Are Your Thoughts?leave a comment