In Florida, Senate Bill 98 would give school boards permission to allow “an inspirational message to be delivered by students at a student assembly.”

In other words, instead of banning such practices outright, this bill would allow a school to let students vote on whether or not a prayer could be delivered at a graduation. And since Christians are in the majority, sounds like an easy way to push your views on everyone else.

The bill passed through the Senate 31-8 on Wednesday.

Its approval came over the objections of senators who said the measure will lead to prayers at school events that students can’t get out of, including possibly in classes, and that some young students will have to listen to prayers or risk being ostracized because they come from a different religious tradition than most of their classmates.

“I implore you to protect minority students and not promote alienation,” said Sen. Eleanor Sobel, D-Hollywood. “We want our public school students to get along.”

But backers of the bill said the measure is needed to protect the religious freedom of students, some of whom now feel they aren’t allowed to offer prayers that the student body, or a large part of it can listen to – that they’re only allowed to pray to themselves or in small groups.

Meanwhile, atheists have to worry about coming out publicly with that label…

At least reader Zach and his friends found a clever way to respond on their campus: 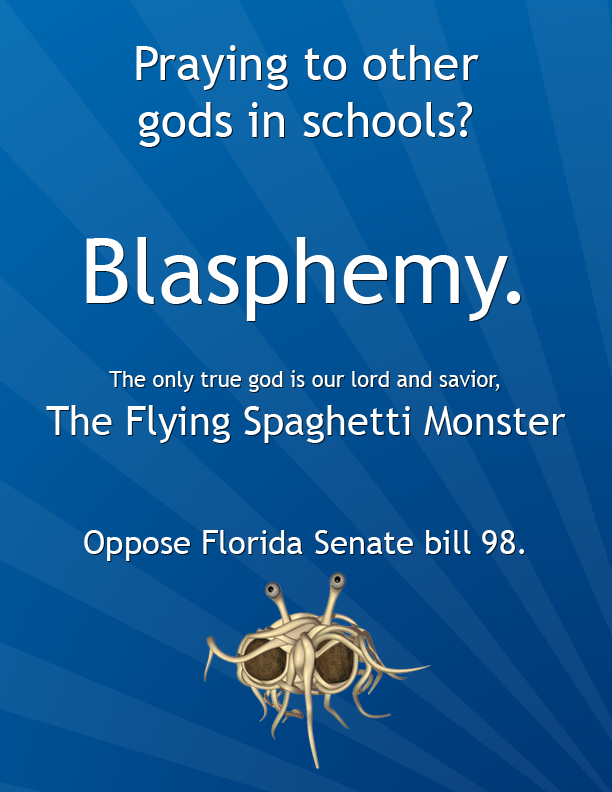 February 3, 2012
Low Pay for Teachers is an Example of 'Biblical Principles'
Next Post

February 3, 2012 State Congressperson Debates Dan Barker on 'Year of the Bible' Resolution
Browse Our Archives
What Are Your Thoughts?leave a comment