For Those of You Who Don’t Think You Can Be Activists… January 30, 2012 Hemant Mehta

Kate at Suburban Sweetheart has an awesome story of why she supports LGBT rights and how her support inspired her to act when an injustice took place in her hometown:

As easily as that, I began to identify as an ally. I went on to intern at the Family Equality Council & worked a legislative assistant on civil rights, including LGBT equality, during my time at the Religious Action Center after college. I’ve served as managing editor of Fusion, an LGBT issues magazine, marched in a pride parade, & have just generally done my best to work for equality whenever possible. I have a really difficult time respecting differences of opinion when it comes to civil rights. I do my best to be respectful of other people’s views, but it’s really hard for me to see any other side here. As I see it, it’s as basic as treating people fairly, & I just can’t see any other side to that.

When I learned this month that my hometown gym, the city-owned Natatorium, is discriminating against same-sex couples in their membership options, I quickly signed onto a petition asking them to change their policies. Then, I shot off a Facebook message to Shane, the guy behind the petition, asking how I could help. Shane attempted to get a couples pass for himself & his new husband & was turned away, told their marriage “isn’t real” despite the fact that they were legally married four months ago in Washington, D.C. His husband, Coty, is a disabled Iraq Wat veteran who uses the Natatorium for water therapy; Shane is his caretaker. 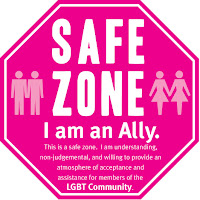 Kate got word out about the discrimination and the story began popping up on some major websites. Thousands of people signed the online petition and you should, too. Many have written messages of disappointment on the Natatorium’s Facebook page. There are also plans to call the Mayor’s Office en masse this Tuesday and 200+ people have already signed up to do that.

All this because Kate had the inspiration to do something about a troubling situation and she took advantage of the tools at her disposal to share her message with a wider audience. She also had the courage to publicly speak out on a potentially controversial subject — but she didn’t care because civil rights for all people shouldn’t be an issue.

We love praising activists. But let’s be clear: Anyone can do what they do. It takes a lot of courage and a little bit of knowledge about how to get your message out. But if you’re sure you’re doing the right thing, it’s not as hard as it seems.

This is why projects like the OUT Campaign, atheist bloggers/writers/speakers — hell, anyone who lists their religion on Facebook as “Atheist” — are so important in our movement. If you can be open and comfortable about your (non-)religious beliefs, it won’t be as hard to take the next step and speak out when a politician says we’re a “Christian nation” or there’s an injustice regarding church/state separation.

January 29, 2012
The Inspiring Story of Oral Roberts' Grandson
Next Post