An Inoffensive Atheist Ad Could Appear on Pennsylvania Buses

Richard Wade must be on to something. After posting about the potential reactions to inoffensive atheist billboards, people are starting to run with the idea.

When Justin Vacula recently saw “God Bless America” scrolling across the outside buses in Lackawanna County, Pennsylvania, he didn’t just want to complain. He wanted to respond to that message — and test the “how little does it take to offend someone?” hypothesis — by proposing the following ad: 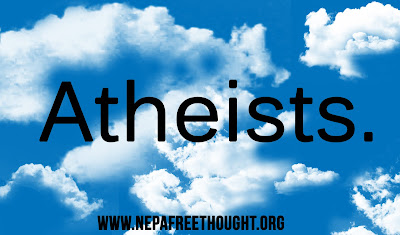 The idea, as seen above — for the advertisement — is quite simple, effective, and interesting. In the past few years, atheist billboards — no matter how inoffensive they may seem — have been met with utter contempt from theists leading atheists to wonder, “Is the fact that we exist and want to advertise ourselves offensive to theists or is it something else?” In order to test this… I want to place a king-size… advertisement on the same buses which host the “God Bless America” messages with a blue sky/white cloud background with the word “atheists” and the URL for the organization for which I am a co-organizer, spokesperson, podcast host, and board member of: the NEPA Freethought Society.

He’s waiting for a response from the advertising company — and if they reject him, they could be facing a potential lawsuit.

If he gets the green light, this could be a really fun billboard campaign…