Dennis Kruse, the same Indiana State Senator who wants public school students to recite the Lord’s Prayer at the beginning of every day, is now sponsoring a bill that would promote Creationism in science class… and he’s getting much farther than he should be:

The Senate Education Committee voted 8-2 in favor of the bill despite experts and some senators saying teaching creationism likely would be ruled unconstitutional if challenged in court.

According to an article from the Associated Press, Purdue University science education professor John Staver told the committee that teaching Creationism could lead to a lawsuit since it’s a violation of church-state separation — and federal courts have agreed in the past.

Staver said he believed any school district that started teaching creationism would face lawsuits they would likely lose.

“All that the citizens of Indiana are going to get from this bill are wasted legal efforts, lawyer fees and penalties,” Staver said.

Sen. Scott Schneider (R-Indianapolis) didn’t care for that logic, though:

“What are we afraid of? Allowing an option for students including creation science as opposed to limiting their exposure?”

No, we aren’t afraid to expose children to other ideologies (false as they may be). We are worried — outside of the inherent falsehood — that by teaching a religious ideology as scientific fact, we run the risk of teaching our children that by simply pretending hard enough, any magical apparition can become the truth.

Creation Science is NOT science. 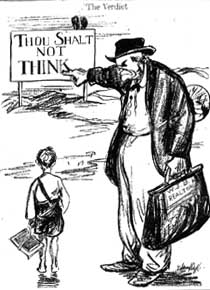 When looking for answers to scientific questions, there are scads of information detailing experiments, observations, conclusions, hypothesis, peer-reviews, successes, and failures. When looking for answers to a religious (read: Christian) based “theory,” you have one collection of books; with spurious authorship; each part written dozens to hundreds of years after any of the supposed characters were supposed to have lived; giving conflicting accounts of events, lineage, history, and people; later edited, redacted, and recompiled by groups of people with several political agendas; has no universally agreed-upon translation; and is not interpreted the same way by any two people.

If Creationism is to be taught as science, then what is preventing these beliefs from also being taught the same way?

If Creationism is to be taught as science, can we allow ALL Creation Stories? For example:

If and when Creationism (any creation story) can be tested, verified, put through the rigors of the scientific method, peer-reviewed, and accepted by rational thinking scientists and people everywhere as a legitimate explanation for the creation of the universe — when Creationism can be placed next to Evolution and the Big Bang without looking like a two-year-old’s marker scribbles hanging on the gallery wall next to a Da Vinci masterpiece — then we can start teaching it in schools. When this ancient campfire story becomes more than the sum of its flawed and mutable parts, I will be among the first in line to sign a petition to get it taught as science.

Until that day (and I won’t be holding my breath), in any states that are considering breaking science, I hope that reason — and the future of education in our country — wins out over the teaching of just-so stories.**

*Thank you, interwebs, and apologies to any details that might have been glossed over

**Not that I have any problem with just-so stories. They’re fun… like Dr. Suess books.