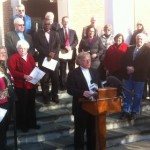 Perhaps I’d gotten too cynical, but I didn’t see this good turn of events coming. As announced yesterday, religious leaders in Cranston, Rhode Island stepped up to defend Jessica and speak out against the hateful comments, the bullying, and the threats.

Here were the rapid reactions I jotted down as I watched:

Overall, I’m really glad to see this press conference happen. True, the bar wasn’t set very high. It would be a sad day indeed if religious moderates wouldn’t come out in favor of the Constitution and against death threats to 16-year-old girls.

Jessica’s case has been deeply polarizing in her community — but at least we’re finding out which “pole” the religious moderates are closer to. It brought together 18 leaders: Baptists and UU’s, Jews and Muslims, all coming together to defend an atheist from violence. We atheists often say that we need the religious moderates to be on our side, condemning the extremists. This is a start.