Christian Fascism Is Coming to a Public School Near You January 24, 2012 Tessa de Leeuw

Christian Fascism Is Coming to a Public School Near You

Katherine Stewart heard about a Christian group forming at her daughter’s school, and instead of closing her eyes and wishing it would go away, she dove in. She researched and researched and researched. She talked to people, went to symposia, delved into a world that wasn’t hers and where she very much did not want to be. Then she wrote a book.

The book (which comes out today) is called The Good News Club, and as innocuous as that sounds, it is the scariest story I have read in a long time. Coming from a horror story fanatic, that is saying something. 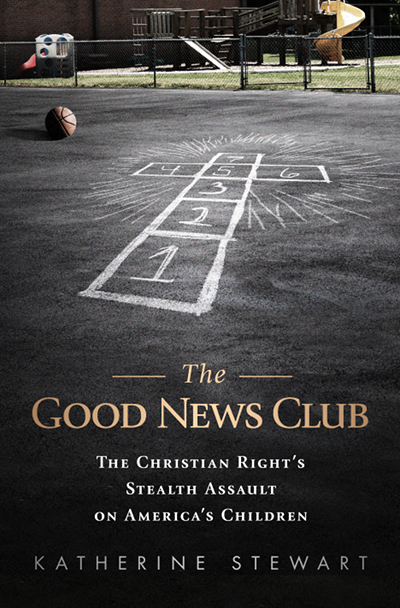 The Good News Club — the organization, not the book — insinuates itself into public schools posing as an innocent after school Bible study group. They are backed by the CEF, the Child Evangelism Fellowship, an organization hell-bent — if you’ll excuse the pun — on breaking the public school system and bringing education back to homes and churches. They are Bible-believing Christians who believe America was founded on Christianity and it is their holy mission to bring the American people back to Christ.

Stewart explains how the Good News Clubs come into our communities unnoticed and how they “harvest” children for their cause. “Harvest” is actually the word the CEF uses for this. Children need permission from their parents to attend the meetings, which is part of how they are allowed to have these Bible study groups in public schools in the first place. The solution seems to be to just not let your child attend, but there are many moderate Christians who will. The children are indoctrinated to believe that only Bible-believing Christians will go to heaven and that you are only good if you believe in Jesus. What is almost worse, is that the children are left with the natural-but-false impression that these teachings are endorsed by their school. This indoctrination breaks up schoolyard friendships, which breaks up communities, but it also penetrates the homes and breaks up families. The CEF makes no excuses; this is exactly their goal. Through the children they want to bring more families to their church and anybody who is not convinced simply isn’t saved.

The book gives many examples of the frightening methods these people use to infiltrate public schools. The author calls these people Christian Nationalists based on their view that Christianity is the foundation of modern day America. At one point, when speaking to Rich Lang, the pastor at Trinity United Methodist Church, there’s an even more sinister comparison:

… In Lang’s view, the American public remains inexcusably ignorant about the new religion in its midst. The new fundamentalism, he insists, is not “historic Christianity.” In fact, it’s not uniquely Christian, nor is it uniquely American. “Fundamentalism is a global phenomenon, and it has come back on steroids since the 1970s and 1980s. Whether you’re talking Buddhism, Hinduism, Judaism, Christianity, or Islam, all forms of fundamentalism are on the rise,” he says.

“And they all want the kids,” he adds, looking at me meaningfully. “Kids are so, so vulnerable at that age, just like little sponges. They don’t talk back to adults, they are not in dialogue. So it’s clear why the children are being targeted. It’s no different than the Lord’s Army in Africa. It’s no different than the Nazis wanting to start with the Hitler Youth. That is where you’d want to start if you were trying to build a fascist movement.”

He pauses to make sure I’ve heard him correctly. “That’s the word, ‘fascism,’” he repeats. “Nobody likes to use it in this country. But I believe that in this country, underneath the appearances, that is exactly the great temptation of our time. The CEF is part of a movement, and you have to call it what it is — ‘Christian Fascism.’” (p. 32-33)

Normally, that comparison would disappoint me. Godwin’s Law states that any discussion, if taken far enough, will eventually lead to one party comparing the other to the Nazis. Using this comparison usually means you lose the argument by default. In this book, however, Stewart has a point. There is hardly a more persuasive way of showing how horrifying this all is than having a pastor compare the CEF’s tactics to those of Hitler and his cronies.

Moreover, Pastor Lang has a point. The Good News Club is like the Hitler Youth, with their indoctrinations, their separatist ideals, their “we are so much better than they are”-style of teaching, and their creepily friendly way in which they instill themselves in the community. German parents in the early 1920s did not know either what they were doing when they allowed their children to join the Hitler Youth. Like any other youth group, it seemed like a good way to instill some discipline and morals into your child. But twenty years later, when the group became mandatory, it was too late. This book serves as a warning to us not to let the Good News Clubs get that far.

Stewart is not an atheist. She doesn’t go into this story telling the reader how awful religion is. She shows us how awful abuse of religious power is. She shows us how moderate Christians will be fooled into allowing this to happen. She makes it believable that such a thing could happen to us. The book does not read like a report of a fact-finding mission, but more like the story your neighbor will tell you over a cup of tea. She will tell you how this happened at the school of the child of a friend of her cousin’s hairdresser’s sister. And you’ll tut and nod and shake your head at all the right places. But when she leaves, the story niggles. You wonder if this could happen at your child’s school. But you would never stand for that, would you?

The book does not give a solution to this frightening phenomenon of religious indoctrination coming to public schools, but forewarned is forearmed. The main weapon of the Good News Club is their innocent façade. The more people know the truth, the sooner this façade is broken and maybe, just maybe, they can be stopped. Read the book. And be prepared to lose some sleep.

(An interview with the author will be posted later today is here.)

January 23, 2012
Rhode Island State Council of Churches Will Come Out to Support Jessica Ahlquist
Next Post

January 24, 2012 An Interview with Katherine Stewart, Author of The Good News Club
Browse Our Archives
What Are Your Thoughts?leave a comment