A few years ago, Guy P. Harrison wrote a book called 50 Reasons People Give for Believing in a God — it was an excellent primer for new atheists trying to figure out how to respond to popular Christian arguments.

Now, Harrison is back with a new book called 50 Popular Beliefs That People Think Are True. (Details for how you can win a copy of the book are at the bottom of this post!) 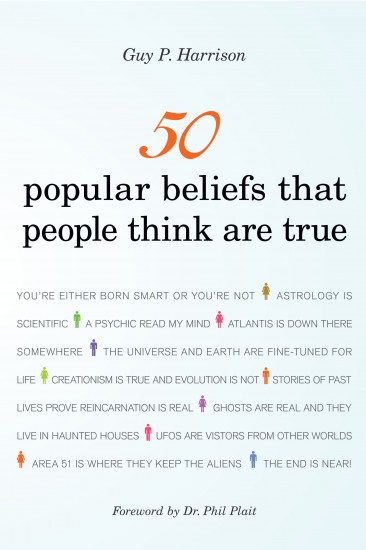 Not surprisingly, the book offers rebuttals to (among many other things) psychic powers, homeopathy, Holocaust deniers, and moon hoaxers.

The excerpt below is from Harrison’s chapter on why vaccines are safe and sound and avoiding them hurts us all:

Heated debates that pit science against pseudoscience — evolution versus creationism, for example — rage on and on. But few of them rack up casualties and have the potential for mayhem like the anti-vaccine controversy. This particular clash between reason and irrational belief is literally killing children right now. Vaccination rates have plunged in parts of America and the United Kingdom because of misinformation and unjustified fears. According to the United Kingdom’s Health Protection Agency, a drop in vaccination coverage levels has again made measles endemic in the UK after it had already been wiped out by vaccines decades ago.

Much of the fears were stirred up in 1998 when British doctor Andrew Wakefield published research claiming that the measles vaccine causes autism. He said the vaccine inflamed intestines, causing harmful proteins to leak out that then made their way to the brain, where they caused autism. This generated considerable coverage in the mainstream media which, of course, sent waves of fear straight into the hearts of millions of parents. Many of them made the decision not to vaccinate their children as a result. Predictably, this was followed by outbreaks of preventable diseases that killed children. Soon after Wakefield’s announcement, MMR vaccine rates dropped from nearly 90 percent to as low as 50 percent in some areas of London. Now comes the kicker: It turned out that Wakefield’s research is garbage. Other scientists could not confirm his findings. Something was wrong, very wrong. But not only has his work been deemed scientifically flawed, it has ethical problems as well. Investigative journalist Brian Deer reported that Wakefield’s study was funded by a lawyer who also was representing five of eight children used in the study for a suit against pharmaceutical companies. In 2010, the Lancet medical journal formally retracted Wakefield’s study that they had published, and the General Medical Council removed Wakefield’s name from the medical register. He can no longer practice medicine in England.

In the late 1990s, antivaccination activists set their sights on a preservative used in some vaccines called thimerosal. No studies suggested that thimerosal might cause autism, but pharmaceutical companies removed it as a precaution anyway. Now, years later, autism rates have continued to rise. “After all the research,” writes Michael Specter in his book, Denialism: How Irrational Thinking Hinders Scientific Progress, Harms the Planet, and Threatens Our Lives, “thimerosal may be the only substance we might say with some certainty doesn’t cause autism; many public health officials have argued that it would make better sense to spend the energy and money searching for a more likely cause.”

Multiple studies have failed to find evidence of an autism-vaccine link. In Japan, the feared MMR “vaccine cocktail” was withdrawn and replaced by single vaccines. A study of thirty thousand children there found that autism rates continued to rise even in MMR’s absence. Other countries, including the United Kingdom, Canada, and Sweden removed thimerosal from vaccines only to see autism rates continue to rise. Meanwhile, researchers in Finland looked for an autism-vaccine link by analyzing the medical records of more than two million children. They found nothing.

It seems to me that vaccines are victims of their own success. People who are fortunate enough to live in countries with strong vaccination programs have been lulled into a false sense of security. Diseases once feared are not so scary anymore. Measles, for example, does not strike fear in the heart of the typical American. But it’s not a disease we should take lightly. It causes brain swelling and high fever and is often fatal. In the past, measles killed millions in Europe and America. It still kills more than one million children per year in the developing world today. Nevertheless, many parents are being scared away from the measles vaccine by warnings with no credible science behind them. The percentage of unvaccinated children in the United States has doubled since 1991. This is as infuriating as it is absurd. We are moving backward.

Dr. Paul Offit, chief of the Division of Infectious Diseases and the director of the Vaccine Education Center at the Children’s Hospital of Philadelphia, is one of the world’s leading experts on vaccines. He is also currently waging a professional war against the antivaccine movement. But it is also clearly personal for him. His frustration and concern for children are often readily apparent when he describes the irresponsible decision to deny vaccines. “The problem with waning immunization rates in the United States isn’t theoretical anymore,” he told me. “Recent outbreaks of measles, whooping cough, mumps, and bacterial meningitis show a clear breakdown in population immunity. Children are now suffering the diseases of their grandparents. It’s unconscionable.”

Nurse Shawn R. Browning is in the trenches on the frontlines of this issue. She has nearly two decades of experience in the medical field, most of it working with the US Navy. She regularly administers vaccines to military personnel and their families. She also has been involved with immunization education for many years. Irrational fears about vaccines are nothing new to her.

“I have had plenty of parents and patients that are misinformed about vaccines,” she said. “When they tell me they don’t want to get a particular vaccine, the first thing I ask them is, ‘why’? I have heard everything from the thimerosal content is bad for you, vaccines cause autism — particularly the MMR vaccine — and everything in between. By law I give them the VIS [vaccine information statements], but in addition I also educate them on the pros of receiving the vaccine versus not. What I have learned is that more times than not, people are willing to get the vaccine once it is explained to them in words they can understand and relate to. They’re not stupid, just ignorant. They have listened to their neighbors, the media, and everyone else and have formed an unjustified opinion. Drives me crazy! Many parents and patients have expressed their gratitude that someone has taken the time to explain things instead of just sticking a needle in them without any explanation. I think our particular patient population is more vaccine hesitant than antivaccine.”

Like most healthcare professionals, Browning is concerned that this reluctance to vaccinate might lead to major outbreaks of preventable diseases:

The biggest fear is that preventable diseases will rise to epidemic proportions again. Infants and children are going to die or be disabled because adults are ignorant and won’t vaccinate themselves or their children. The outbreak of pertussis [whooping cough] is the latest. People think that since they are adults, they don’t need a vaccine. Yet how many die from complications from the flu every year? [Influenza virus, the flu, kills as many as five hundred thousand people each year worldwide, according to the World Health Organization.15] It’s very scary. We also have an obligation to get vaccinated to protect those [who] can’t be vaccinated due to various reasons [such as immune system problems].

There was this mom [who] came into our clinic a little more than a year ago to get her one-year-old daughter her immunizations. The corpsman that brought them back to the room started to explain the vaccines the child would be getting and their potential side effects to the mom. The mom politely interrupted the corpsman and proceeded to explain that this child was not her first baby. She had once been “one of those moms” who didn’t believe in vaccines, and her first little girl had died when she got the measles. Just how do you respond to that? Your heart breaks.

In 1997, 4,138 children entered California kindergartens without being vaccinated because they had exemptions. By 2008, that number had more than doubled. Parents citing religious or philosophical objections to having their children vaccinated are putting not only their own children at risk but the lives of many others as well. Babies who are too young to be vaccinated can be infected and die. Children who have immune system problems and cannot be vaccinated have to rely on others around them to be vaccinated in order to keep the diseases at bay. When vaccination rates drop, danger to these vulnerable groups increases. According to a Centers for Disease Control and Prevention (CDC) expert, a parent’s decision to refuse vaccination means his or her child is thirty-five times more likely to get measles and twenty-two times more likely to come down with pertussis (whooping cough). Please don’t think for a second that this is exaggeration or fearmongering. Children are paying a price for this madness in small pockets across America now, and the potential for much greater suffering is real. In April 2011, for example, a private school in Virginia had to close because half its students were infected with pertussis. None of the children had been vaccinated. Many of the parents had obtained religious exemptions that officially sanctioned their negligence. News of several recent infant deaths in California due to pertussis either had not reached those parents or failed to impress them.

Why subject children to this unnecessary danger? To protect them from autism? Very large, thorough, and expensive scientific studies did not find any reason to conclude that vaccines cause autism. Therefore it simply makes no sense to withhold such important protection from a child.

From 50 Popular Beliefs That People Think Are True (Prometheus Books, 2012). Reprinted by permission of the publisher.

If you’d like to win a copy of the book, just leave a comment telling us about a belief you used to hold and what ultimately led you away from it! (God doesn’t count. We’ve heard that one before.) Please include the word “Bermuda” at the end of your comment if you’d like to be considered for the prize!

January 21, 2012
Before You Have Sexy Times, Consult This Chart
Next Post