The Forsyth County Board of Commissioners in North Carolina used to begin their meetings with a Christian prayer. Not just non-denominational any-god-will-do prayers, but overwhelmingly one-sided Christian prayers:

The undisputed record shows that the prayers delivered at the outset of Board meetings from May 29, 2007 through December 15, 2008 referred to Jesus, Jesus Christ, Christ, or Savior with overwhelming frequency… No non- Christian deities are invoked… These prayers as a whole cannot be considered non- sectarian or civil prayer. They display a preference for Christianity over other religions by the government.

There has been a battle over the legality of these prayers for years now. First, a local judge, and later, the Fourth Circuit Court of Appeals, said this practice violated the Establishment Clause and put a stop to it. Now, the case can finally be put to rest. The Supreme Court doesn’t want to hear any further appeals:

The U.S. Supreme Court declined Tuesday to hear an appeal of a lower court’s decision banning sectarian prayer at meetings of the Forsyth County Board of Commissioners…

“All Americans ought to feel welcome at governmental meetings,” said the Rev. Barry Lynn, executive director of Americans United, in a statement. “The Constitution clearly forbids government to play favorites when it comes to religion.”

The county board of commissioners appealed multiple lower court rulings that determined the explicitly sectarian prayers couldn’t be offered. It wasn’t clear how much money the litigation has cost the county since 2007, and calls to commissioners were not immediately returned Tuesday.

I hope it cost them a lot and I hope citizens in the area vote those commissioners out of office for wasting their tax money and time. This was a court case that never should’ve happened. It had to be fought only because Christians insisted that prayer must precede a government meeting. Maybe now they’ll learn their lesson.

Or, judging by this FOX News headline, maybe they still have a long way to go: 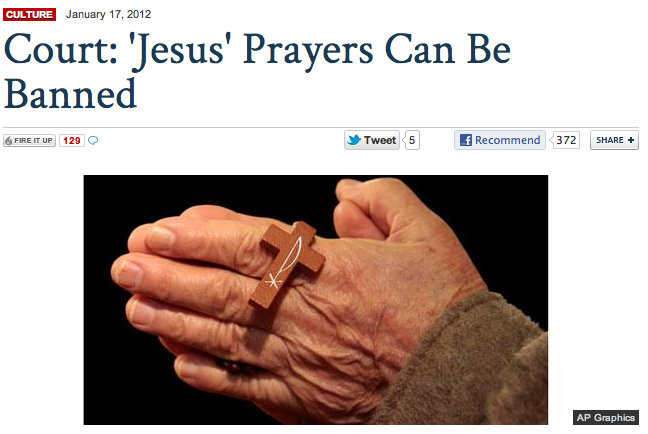