You might remember when Christian rapper B-SHOC (a.k.a. Bryan Edmonds) was invited to speak at an assembly at New Heights Middle School in Jefferson, South Carolina this past September. Here’s how that went (the relevant part begins at the 3:04 mark): 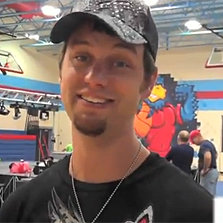 Even the New York Times covered the incident and called it part of a trend in which Christians are illegally proselytizing in public schools.

Anyway, last month, Jonathan Anderson (an atheist) sued the district (PDF) on behalf of his son. With the ACLU’s help, there’s finally a resolution to this case. And it’s a good one.

The board of the Chesterfield County School District voted tonight to adopt a proposed settlement agreement that would put an end to the district’s pervasive practice of school-sponsored prayer, preaching and religious activities aimed at students.

… Under the agreement, the district would be subject to a court order, or consent decree, requiring officials to comply with the law in this area…

In other words, the district will make sure there is no more proselytization in the schools.

“The district has done the right thing by acknowledging that school officials cannot use their positions of influence to persuade students to devote themselves to one particular religion,” said Victoria Middleton, executive director of the ACLU of South Carolina. “We’re glad that the school has agreed to a reasonable settlement.”

“Every family has the right to instill their own values and beliefs in their children, but in the classroom, every child should be welcomed with the same degree of respect, no matter what he or she believes,” said Heather L. Weaver, staff attorney with the ACLU Program on Freedom of Religion and Belief. “Public schools should be focused on providing children with a quality education, not indoctrinating them through religious coercion.”

The school district ultimately gave up on defending themselves for two reasons:

1) It would cost them thousands of dollars in legal fees.

2) They knew they would lose. They know damn well that what they were doing was illegal.

This is their exact statement:

Following legal advice that various practices and events in the schools related to religion needed to stop occurring, based on court decisions interpreting the Establishment Clause of the U.S. Constitution, the Board majority approved the consent decree and order. The consent decree and order recognizes that students and teachers do have rights under the Free Exercise and Free Speech provisions of the First Amendment to pray at school under certain conditions and to participate in other religious activities.

The Board was advised that defending the lawsuit would result in a court-imposed order after many thousands of dollars had been spent on legal costs. The Board wishes to make it clear that it intends to abide by the constitutional principle of separation of church and state, while also recognizing and allowing the permissible exercise of religion by its staff and students and all citizens.

This is why we have to keep the pressure on these districts.

This is why we have to support groups like the ACLU and FFRF.

Because we’re right and they’re wrong. Because we respect the law and they choose to break it. Because we believe public education ought to remain secular and they believe schools ought to function as churches.

Even in South Carolina, they’ve caved in. Students in that district won’t have to put up with teachers and administrators who would rather give a sermon than educate the children.

We have the ACLU and Jonathan Anderson to thank for that.