Three Republican state senators in Indiana have a plan to fix public education in the state: Have someone recite the Lord’s Prayer at the beginning of every school day.

In order that each student recognize the importance of spiritual development in establishing character and becoming a good citizen, the governing body of a school corporation or the equivalent authority of a charter school may require the recitation of the Lord’s Prayer at the beginning of each school day. The prayer may be recited by a teacher, a student, or the class of students.

Since when is “spiritual development” important in becoming a good citizen?! Being an ethical person doesn’t result from believe in bullshit. It comes from a variety of sources, including good parenting, strong role models, and the ability to think reasonably and rationally through situations.

The legislation was introduced by Senator Jim Tomes and co-authored by Senators Dennis Kruse and Travis Holdman. 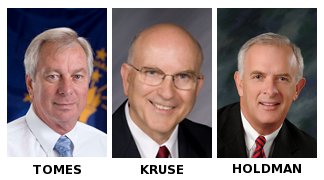 In case you’re unfamiliar with what they’re talking about, this is the kind of Christian prayer the senators believe schools need:

Our Father, which art in heaven,
Hallowed be thy Name.
Thy Kingdom come.
Thy will be done in earth,
As it is in heaven.
Give us this day our daily bread.
And forgive us our trespasses,
As we forgive them that trespass against us.
And lead us not into temptation,
But deliver us from evil.
For thine is the kingdom,
The power, and the glory,
For ever and ever.
Amen.

Wanna know what’s written just a few lines before that in Matthew 6:5?

And when you pray, do not be like the hypocrites, for they love to pray standing in the synagogues and on the street corners to be seen by others…

Doug Masson explains that they could use a slightly less Christian-y prayer, but even that would pose a problem:

They could just as easily have said prayer generically, knowing that given demographics, the prayer would always be either neutral or some flavor of Christianity. It would never be anything contrary to Christianity, but at least they’d have a fig leaf of neutrality. But, by raising up The Lord’s Prayer, they aren’t even pretending that non-Christian religions are entitled to anything like equal consideration.

Sure, the bill would allow you to walk out of class if you don’t want to participate, but the senators don’t seem to give a shit about the inevitable ostracism, hostility, and teasing those students would face.

If you live in Indiana, please contact your local representatives and give them hell about this awful and unconstitutional piece of legislation.

(Thanks to Tushar for the link)

January 11, 2012
Jessica Ahlquist Has Won Her Lawsuit!
Next Post