An Atheist Who Supports Tim Tebow

Well, this is different: One man says he’s an atheist who supports Tim Tebow:

Unlike so many athletes, Tebow will not let you down. He will not be caught in a bizarre incident at a night club at 3:00 in the morning. He will not father illegitimate kids, test positive for drugs, or defile his skin with ridiculous tattoos.

Funny thing is, he COULD do all these things, then simply ask for forgiveness. His ticket to heaven would remain valid. Sin, forgive, sin, forgive, repeat. Doesn’t sound like a recipe for morality, but that’s another essay.

As it stands, Tebow’s life includes no such sin/repeat pattern, and there is comfort in this for his fans. His self control is simply staggering.

It goes on like that for a while. Tebow’s a good guy, his teammates love him, he helps people, etc.

Of course, none of those things are the reasons I (and many other atheists) criticize him.

My issue with Tebow is that he thinks he can break the rules of the game (or flaunt its loopholes) simply because he’s Christian.

He did it in college when he wrote Bible messages under his eye black:

Perhaps it wasn’t explicitly forbidden at the time, but would an atheist player have gotten away with the same thing had he written “There is” “No God” instead of Bible verses? I doubt it.

(The NCAA later banned eye black messages in what is known as “The Tebow Rule.”)

When Tebow entered the NFL, he broke the rule that said no messages could be written on uniforms: 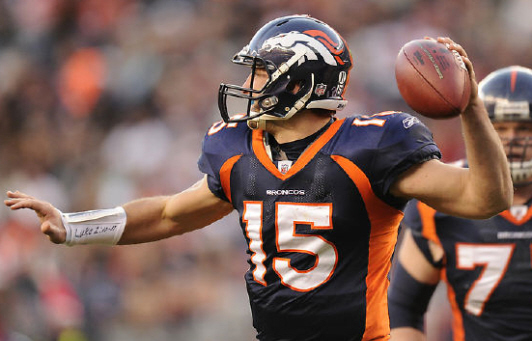 Even though the penalty for breaking the rule started at $5,000, Tebow was never fined.

Would an atheist have received the same treatment? Doubtful.

I don’t care if Tebow’s a Christian — there are plenty of Christian athletes who are very open about their faith. My problem is that he thinks he’s somehow above the law because of it — and the people around him just reinforce that notion.

January 10, 2012
A Bittersweet Farewell to Off The Map
Next Post