For many, a new year often brings forth resolutions. Yes, I’ll admit, we did write some down in my family. Mostly because it’s fun to reminisce about the past year and be proud of how much we have accomplished… but also because we all have a “bucket list” and a new year seems as appropriate a time as any to put a few of those items in motion.

Getting involved in a secular charity is one of my resolutions… or rather, goal, for this year (as if I don’t have enough on my plate). I came to this decision during the Christmas season after explaining to my children why we aren’t dropping money in the bell ringers’ buckets of the Salvation Army. 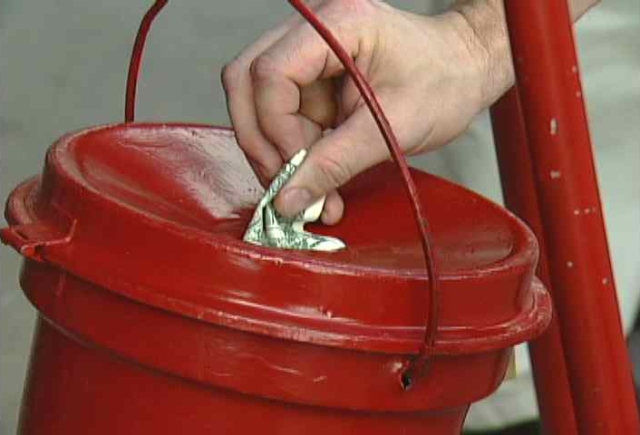 It’s not because most of them ring the bell as if they just watched their dog get run over by a car, then had to scrape it off the road and throw it in a piranha-infested tank and watch it get shredded. It’s also not because the sound of that incessant bell ringing makes me wish I’d rather be back in basic training while the TI yells at me in a crowded chowhall.

I had to explain to my kiddos that I choose not to donate to the Salvation Army because they are class-A bigots.

So what? Why not just tell the kids that the Salvation Army hates gay people and call it a day? Well, it’s not always that easy.

Kids like to ask why. For my son, who doesn’t believe in supernatural deities, it’s a touch easier. My daughter, on the other hand, believes in a personal god, and her youth and naïveté won’t let her consider that people of faith could also be purveyors of intolerance and undue judgment.

My son takes the approach that all people should have equal rights. My daughter sometimes has a more challenging time thinking in terms of all people being equal. Although, occasionally it’s fun because I get to ask her, “Why?” or “Is it fair if people tell you that you can’t have/do something because their god said so?” Once, when I walked past a Salvation Army bell-ringer, my daughter tried to make me feel guilty for not giving them money. “They help kids, Mom. And if you don’t help then you are saying you don’t care about those kids,” quoth the 10-year-old stinker. “I’m not supporting an organization that promotes hate, ” I responded… although I was thinking, “Just get into the store and don’t make eye contact.”

Our family “bucket list” may not be red or manned by a bell-ringer, but it is filled with plans, goals, and hope.

As part of that list, during the first few months of the new year, I look forward to researching, with my kids, secular and atheist charities. We’ll choose one we can all agree works in the best interest of humanity. Since my kids are of differing opinions, it will make it that much more interesting to find common ground based on how we all define humanism. It’s challenging, but worth it. In the end it’s a lesson for all of us in how to discuss (without name-calling) different opinion without (immediately) telling other people they are crazy. It’s a time to debate, a chance to be skeptical, and an opportunity to think for ourselves.

Maybe next year we can stick a slip of paper with secular charity ideas into the  red bucket.

I encourage everyone to take a look at some charities. Getting involved may just make your heart grow 3 times bigger this year (and not in a serious-medical condition kind of way).

Here are a few specific suggestions along with other resources to help you out:

A list of Atheist Charities on Just The Messenger

A Quick Guide To Being An Atheist Volunteer on Examiner.com

… and many more. Just Google it.