Christian Billboard Suggests Stalin’s Atrocities Were Due to His Atheism January 2, 2012 Hemant Mehta

Christian Billboard Suggests Stalin’s Atrocities Were Due to His Atheism

Larry Taunton is a Christian and the author of a book called The Grace Effect. A large chunk of the book focuses on how awful societies ruled under atheism are. Because apparently those exist…

And that brings us to the promotional campaign for his book — a number of billboards in Birmingham, Alabama with a picture of Stalin and the words “Imagine no religion? So did he.” 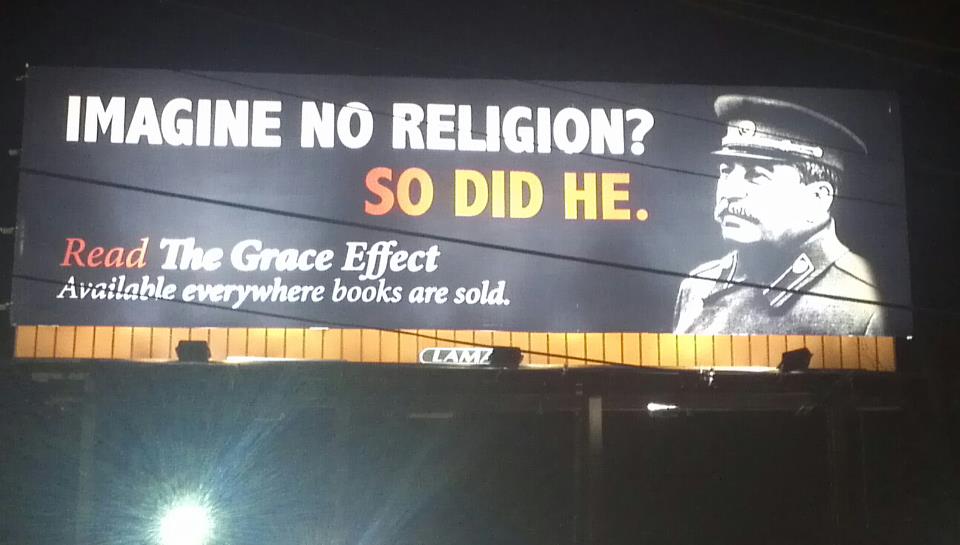 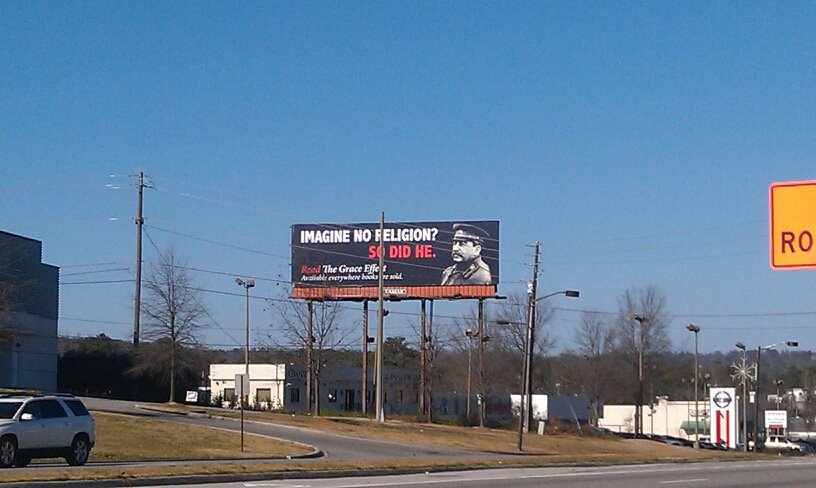 Wow… It takes cojones to do something that utterly ignorant.

Taunton thinks that because Stalin was an atheist, he committed awful acts of genocide. That argument makes as much sense as saying his mustache was the cause of all the horrors. It’s also an argument that’s been refuted over and over and over again.

Stalin didn’t kill anyone in the name of atheism. There’s no “atheist doctrine” other than disbelief in any god. Stalin preached dogmatism in political ways, not anti-religious ones. He replaced god with himself.

But, you know, admitting that would undermine the entire premise of Taunton’s book so he just ignored all those facts.

Here’s the truth: People can be good or bad no matter what their religious views are. If someone tells you he’s a Christian, you know very little about how he treats other people. If someone tells you she’s an atheist, all you know is that she doesn’t believe in a god. You have to talk to them or listen to them to get a better sense of who they are as people.

Does Taunton really believe we’d be better under Christian rule?

We have had Christian presidents and an overwhelmingly Christian Congress for decades now and look at what we have to show for it: thousands of dead soldiers from unnecessary wars, GLBT people denied equal rights under the law, women unable to get safe abortions (or even birth control) in many parts of the country, etc.

We need leaders who are willing to be criticized and who make decisions based on the evidence and not their religious (or dogmatic) beliefs. Stalin didn’t fall into either of those categories.

And Taunton ought to be ashamed of himself for promoting a fully-debunked myth.

January 2, 2012 A Revised Billboard for 'The Grace Effect'
Browse Our Archives
What Are Your Thoughts?leave a comment