***Update***: Mattheiss is a staffer at the school and not a teacher. My apologies for the post’s title. Still, that doesn’t take away from anything she writes on the Facebook wall. Staffers, just like teachers, cannot use work time to proselytize. And Mattheiss makes it clear that she’s ignoring that rule completely; she writes that she prays with kids daily. If this were part of some after school Christian club, that would be legal, but there’s no indication of that.

One of the problems with proselytizing public school teachers is that their students are not always aware it’s wrong, and even when they do, they’re not always willing to call their teachers out on it (for good reason).

That’s why it’s always helpful when preaching staffers come right out in the open and say they’re all about bringing children to Jesus during work hours.

That’s what Mary Mattheiss did on Facebook yesterday. In a thread by Eric Hovind (son of Creationist and criminal Kent Hovind) about public schools, Mattheiss made it very clear that she has prayed with her students for the past 30 years.

To make things even better, she mentions the name of her current school: Warrington Elementary School in Pensacola, FL. Apparently, they don’t punish staffers who use work time to proselytize. 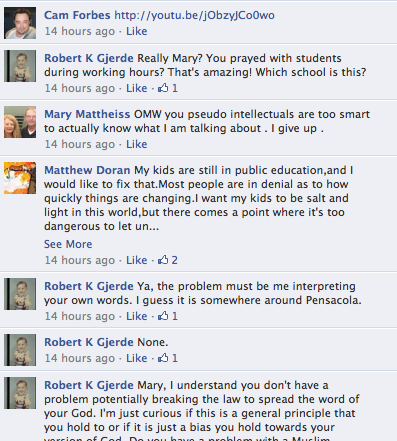 That’s because she deleted them.

She hoped no one would find out — maybe because she knows that preaching in a public school is illegal.

But that’s why Jesus invented screenshots.

Let’s take you back about 14 hours… 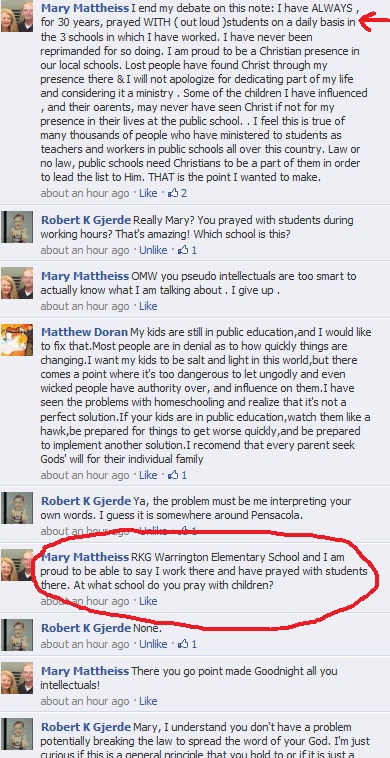 It’s so easy when you get a confession, isn’t it…?

I’ve sent a message (and the screenshot) to the principal to find out what she plans to do about this and why her school is allowing this practice to continue. I’ll let you know once I get a response.

(Thanks to Michael for the images)