The Chicago Gay Pride Parade takes place the last Sunday of June and the route happens to pass by a Catholic church. When you’re in a big city, it’s kind of hard not to pass a church along a large parade route. It’s not like they did it on purpose.

But the priest at the church said he would be unable to hold Sunday morning mass if the parade went on as planned.

That led Cardinal Francis George, Archbishop of Chicago, to speak out against the parade in the worst possible way (watch from the 2:50 mark):

“Well, I go with the pastor. I mean, he’s telling us that they won’t be able to have Church services on Sunday, if that’s the case. You know, you don’t want the Gay Liberation Movement to morph into something like the Ku Klux Klan, demonstrating in the streets against Catholicism. So, I think if that’s what’s happening, and I don’t know that it is, but I would respect the local pastor’s, you know, position on that. Then I think that’s a matter of concern for all of us.”

If you keep watching that clip, cohost Dane Placko (kind of) calls him out on the analogy, saying it’s a “little strong.”

Cardinal George responds: “It is.” And then goes on defending it.

For what it’s worth, parade organizers changed the time of the parade, pushing it back two hours so as to not interfere with the service. Frankly, I don’t think they needed to do that, but hey, they’re not there to make trouble. They just want people to get along. Too bad you can’t say the same thing about the Catholic hierarchy.

The Cardinal still hasn’t apologized for what he said. Instead he just added, “It is terribly wrong and sinful that gays and lesbians have been harassed and subjected to psychological and even physical harm.”

Jerry Coyne points out the obvious:

One of the biggest harassers, of course, has been the Church itself, since it officially pronounces gays as “disordered” and “sinful.”

The group Truth Wins Out will be placing this full-page ad in the Chicago Tribune this Sunday, calling for the Cardinal to resign: 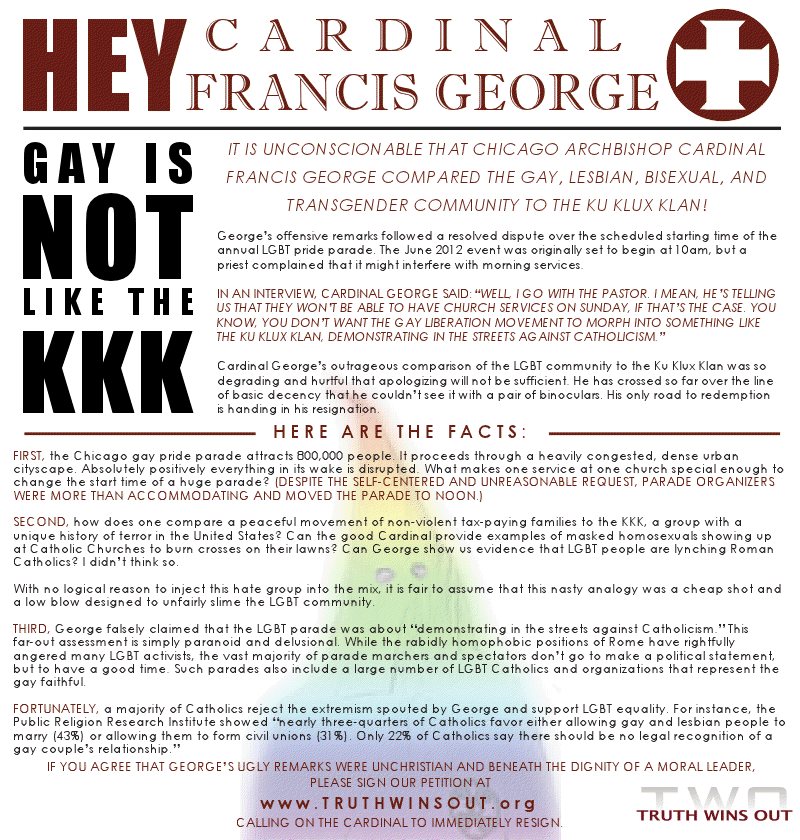 It’s not going to make the Cardinal change his mind, but at least it’ll point out his bigotry to a wider audience.

You have to love it when religious leaders do our work for us. By telling the world what they really believe — especially when it’s prejudice like that — they’re exposing the folly of faith on their own. It gives lay Catholics just another thing to have to defend.

Why they choose to remain part of a church that puts hatemongers like this in charge is something they should have to explain.

To make things even better, some Christian groups are jumping on the Bigot Bandwagon, like our friends at the Illinois Family Institute:

As is their wont to do, homosexual activists — ever the embodiment of tolerance and freedom — became livid over Cardinal George’s analogy. As too is customary for homosexual activists, they seem to believe their indignation and “hurt feelings” serve just as well as an actual argument.

Cardinal George’s analogy is fair and apt. Many homosexual activists harbor unconcealed hatred for not only the Catholic Church but also for all Protestant denominations that hold orthodox views of homosexuality. And these homosexual activists openly express their hatred in vile and vitriolic rhetoric.

The salient question for conservatives is, “Does the analogy work?” In other words, are there points of correspondence between the two ideas or phenomena being compared, and are the points of correspondence relevant to the issue or issues being debated? Whether it offends the sensibilities of those who choose to make their unchosen homosexual attractions central to their identity is irrelevant.

If every Catholic parish and every Protestant church had a leader who would speak the truth about homosexuality with the clarity, conviction, and courage that Cardinal George did, perhaps we could end the sorry spectacle of the Chicago “gay pride” parade for good.

We don’t hate the church for their views.

We feel sorry for the church.

We wish you could learn to love people like we do instead of fighting to take away their rights. We wish you would pay more attention to the positive parts of your holy books (there are some!) than the cherrypicked hateful parts you love to take out of context. We wish that the good people who belong to those congregations didn’t have to be associated with abominable, intolerant, often-self-proclaimed spokespeople for their faith like the folks at IFI.

There’s nothing anti-Catholic about gay pride just as there’s nothing anti-Catholic about the state of Illinois denying the Church funding for their adoption agencies. Cardinal George just wants to pretend like this is all about him, like everyone is against him and his religion. It’s not. No one’s even thinking about him — but he wants to insert himself into the conversation regardless.

There are plenty of reasons to oppose the Catholic Church. But the Gay Pride Parade wasn’t focusing on any of them. Hell, gay Catholics are welcome to join in and show their support 🙂

In the meantime, let’s hope Cardinal George stays in the spotlight. He speaks for millions of Catholics and he’s showing just how awful their theology can be. He’s doing whatever he can to push people away from the faith every time he opens his mouth and we should thank him for that

***Update***: The Chicago Tribune published an editorial today half-heartedly calling the Cardinal out on his bullshit. The best they can do is say his analogy was “bizarre” — rather, it was downright infuriating and untrue — but they do provide some context about how the Gay Pride Parade has never been anti-religious.

Responding to the blowback, a diocesan spokeswoman said the remarks were taken out of context and suggested people listen to the entire interview. We did. They aren’t. George reiterated them on Wednesday, issuing a statement just when things might have been dying down.

“When the pastor’s request for reconsideration of the plans was ignored, the organizers invited an obvious comparison to other groups who have historically attempted to stifle the religious freedom of the Catholic Church,” the statement read. “One such organization is the Ku Klux Klan which, well into the 1940s, paraded through American cities not only to interfere with Catholic worship but also to demonstrate that Catholics stand outside the American consensus. It is not a precedent anyone should want to emulate.”

That’s right: As recently as 70 years ago, the KKK openly demonstrated against the Catholic Church. What that has to do with the pride parade is lost on us.

“We have not been violent in seeking out our rights, so for the cardinal to then equate our movement with one of the most heinous and murderous organizations in the history of our country is just baffling,” Martin Grochala of Dignity Chicago told Fox Chicago.

(In 1986, the Klan staged an anti-homosexual rally just before the 17th annual Pride parade, but never mind.)

Over the course of four decades, the Chicago Pride Parade has marched past hundreds of churches without stifling anyone’s religious beliefs. Come June, it will do so again.

December 30, 2011 Public School Teacher Boasts About Praying with Students... Then Tries to Hide Her Comments
Browse Our Archives
What Are Your Thoughts?leave a comment