Robert Wilonsky, blogger for the Dallas Observer, reports that Westboro Baptist Church will protest the TicketCity Bowl in Dallas on January 2nd. 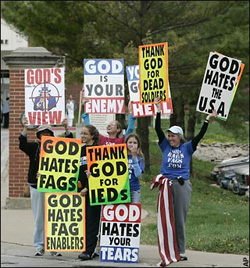 Why that game in particular? Well, the participants are Penn State and the University of Houston:

You can probably figure out why The Most Hated Family in America is out to get the Lions: “Penn State is like all of the universities in doomed USA: full of proud, fornicating, brutish sinners, bowing down to college sports. That’s why Jerry Sandusky had full reign to rape little boys, under the noses of the likes of your hero Joe Paterno and his bosses.” As for the Cougars? “Houston, meanwhile elected a dyke for Mayor.”

Victim-blaming and homophobia: standard operating procedure for the WBC.

But they won’t go unopposed. Occupy Dallas is planning a counter-protest.

Westboro will also picket the AT&T Cotton Bowl Classic in Arlington on January 6th (you know, since they’re already in the area…):

If you gave even a fraction of the time, money, or interest in serving God that you give to the players on the field, this country wouldn’t be in the mess it is in. We are coming in warning to this foolish evil generation.

Tough love, considering one of the teams in that game is from their home state of Kansas. There’s no protest planned for that one, to my knowledge, but I’m sure someone can start one…

If you see them at either protest, be sure to let us know how it goes. (And take pictures!)