The story in a nutshell:

A Republican state senator from Minnesota, Amy Koch, resigned from her leadership position after allegations surfaced of an “inappropriate relationship” she had with a staffer.

Koch is married (with one child) and had tried, unsuccessfully, to pass a bill that said “a marriage between a man and a woman is the only domestic legal union that shall be valid or recognized in Minnesota.”

In a brilliant move, John Medeiros wrote an open letter to her on behalf of the gay and lesbian community apologizing for ruining her marriage:

We are ashamed of ourselves for causing you to have what the media refers to as an “illicit affair” with your staffer, and we also extend our deepest apologies to him and to his wife. These recent events have made it quite clear that our gay and lesbian tactics have gone too far, affecting even the most respectful of our society.

I can see it now: 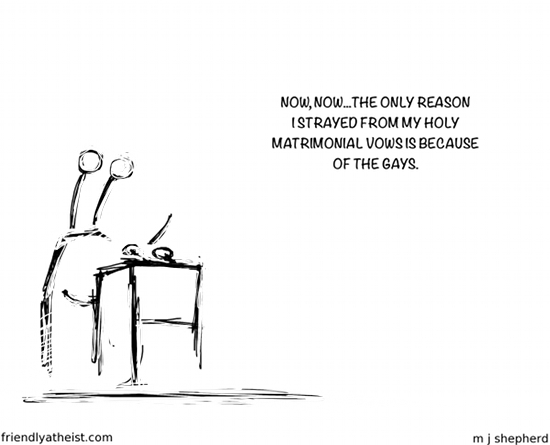 At some point, the opponents of gay marriage are going to have to admit their own hypocrisy. Gay marriage don’t affect straight marriages. Married people make their own decisions regardless of their orientation and they ought to take responsibility for them.

December 26, 2011 One More Eulogy for Hitch
Browse Our Archives
What Are Your Thoughts?leave a comment