Church Wants You To Add a Zero to Your Contributions December 23, 2011 Hemant Mehta

Church Wants You To Add a Zero to Your Contributions

Adidas recently tried to trademark the term “adiZero” for a new line of footwear/clothing… but the U.S. Patent and Trademark Office denied the request.

Because it’s dangerously close to a phrase the Christian Faith Fellowship Church in Zion, Illinois has already trademarked:

As in: Add a zero to the amount you’re already tithing us because Jesus needs more cash.

As in: We’ll do a couple decent things with the extra money for media purposes but the pastor needs a bigger house!

The congregation sells “Add A Zero” T-shirts and hats in its gift shop, but it does not move a large volume, said attorney Richard W. Young, who is representing the church in the trademark dispute. In some years, they may sell only two or three items with the slogan, he said.

After losing a second appeal in September 2010, Adidas asked the federal government to rescind the church’s claim to the slogan on the grounds it didn’t use the phrase enough. That request is pending.

I don’t really care about the legal battle here — Maybe the two words are legally close to each other and Adidas has to rename their apparel line. Maybe Adidas has a case here since the church is basically squatting on the phrase without making real use of it. Whatever.

But here’s a solution that’ll make for a far more productive church campaign. 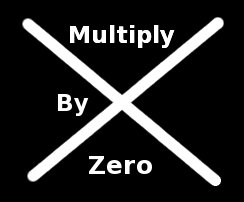 Your contribution will be giving the church exactly what it deserves.

(Thanks to Chas for the link)

December 23, 2011 When Doctors Speak Nonsense
Browse Our Archives
What Are Your Thoughts?leave a comment